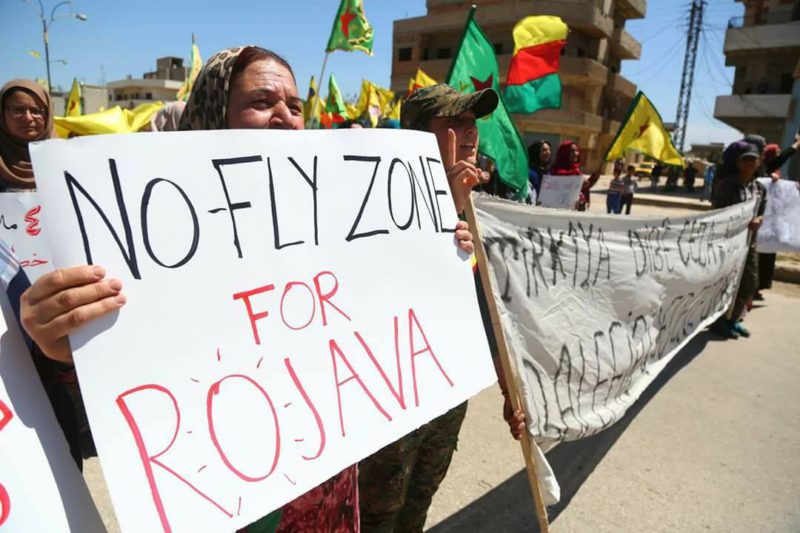 QAMISHLO, Syrian Kurdistan,— Fighting erupted on Wednesday along Syria’s Kurdish northeastern border between Turkish forces and Kurdish militiamen, as tensions boiled over in the aftermath of deadly Turkish air strikes the previous day.

The strikes against the Kurdish People’s Protection Units (YPG) have thrown the complexity of Syria’s war into sharp relief and even sparked calls for a no-fly zone in Syrian Kurdistan (the country’s north).

The skies over northern Syria are increasingly congested, with the Syrian government, Turkey, Russia and the US-led international coalition all carrying out bombing raids across the region.

Tensions escalated further on Wednesday with cross-border clashes between Turkish forces and the YPG near Darbasiyah, a border town in Syria’s northeast Hasakeh province.

According to the Syrian Observatory for Human Rights, YPG fighters “fired on an armoured vehicle belonging to Turkish forces that had crossed the Syrian-Turkish border.”

Turkey fired a barrage of artillery at the YPG, who returned fire with rockets on Turkish outposts on the border.

There was no immediate information on casualties, said the Observatory’s Rami Abdel Rahman.

“There is sporadic shelling now by the Turkish army and an exchange of fire with some border outposts,” Xelil told AFP.

Ankara has bombed the YPG in Syrian Kurdistan for months, calling it a “terrorist” group because of its ties to the outlawed Kurdistan Workers’ Party (PKK), which has been waging a deadly insurgency against Turkey since 1984.

Turkey fears the creation of an autonomous Kurdish region in northern Syria that will not be loyal to Ankara — would spur the separatist ambitions of Turkey’s own Kurds.

Turkey is dreaming of and doing every possible to create a system in northern Syria identical to the Turkey-loyal Iraqi Kurdistan Region led by KDP leader Massoud Barazani, analysts say.

On Tuesday, Turkish warplanes targeted YPG positions in Syrian Kurdistan, killing at least 28 people, according to the Observatory.

Hundreds of civilians gathered in Syrian Kurdistan on Wednesday to call for a no-fly zone across the country’s north, echoing a YPG demand in response to Turkey’s deadly bombing raids.

“Only (by) declaring north Syria as a no-fly zone can YPG defend the country unhindered. Turkey must adhere to no-fly zone,” the YPG wrote on Twitter.

It posted a series of tweets with the hashtag #NoFlyZone4Rojava, using the Kurdish name for Kurdish-majority parts of northern Syria.

“This message is not only for Turkey, it’s for America and the world to stand in the face of this Turkish aggression with a strong position,” said protester Mohammed Mahmoud.

The Turkish raids drew condemnation Wednesday from both the Syrian government of Bashar al-Assad and its ally Moscow.

And Russia said Turkey’s behaviour was cause for “serious concern”.

“We consider such actions unacceptable and going against the founding principles of international relations,” it said, calling “all sides to show restraint” and focus on fighting terrorism.

The strikes have underlined the complexities of the battlefields in Iraq and Syria, where twin US-backed offensives are seeking to dislodge IS from its last major urban strongholds.

They could also exacerbate tensions between Ankara and its NATO ally Washington, which leads an anti-IS coalition carrying out air strikes in Syria and Iraq and sees the Kurds as instrumental in the fight against IS.

On Wednesday, coalition spokesman US Colonel John Dorrian said Turkey gave the international alliance “less than an hour of notification time before the strikes were conducted, that’s not enough time”.

US forces were operating within 10 kilometres (six miles) of strikes in northern Iraq where a “significant number” of peshmerga fighters were killed, he said.

Syria’s conflict erupted in 2011 with protests calling for Assad’s ouster but has since evolved into a multi-front war drawing in global powers.

Syrian Kurdistan’s ruling PYD has established three autonomous zones, or Cantons of Jazeera, Kobani and Afrin and a Kurdish government across Syrian Kurdistan in 2013. On March 17, 2016 Syria’s Kurds declared a federal region in Syrian Kurdistan.