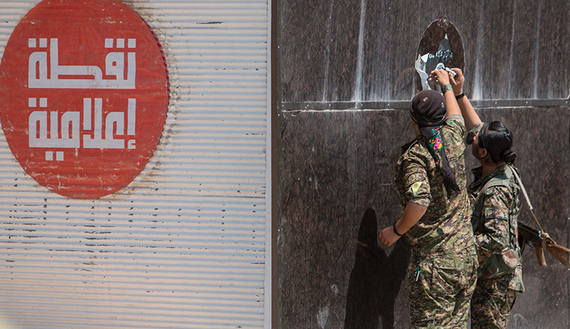 When the Kurdish People’s Protection Units (YPG) expelled the Islamic State from Tell Abyad, President Recep Tayyip Erdogan, other Justice and Development Party (AKP) leaders and the pro-government media reacted hysterically. Among their frenzied scenarios: “Kurdish state in the making in northern Syria with US assistance,” “Kurdish ethnic cleansing of Arabs and Turkmens,” “Corridor opening to move Northern Iraq oil to Mediterranean.” One about the Democratic Union Party went further: “PYD more dangerous than [IS].”

We are so engrossed with demonizing the defensive operations of the Kurdish movement in Rojava that we don’t even have time to discuss what the PYD and the YPG are actually doing. Never mind the crazed scenarios of setting up a Kurdish state or opening a corridor to the Mediterranean, there are two important questions to study:

The YPG, which entered Tell Abyad with the support of the US Air Force and Arab fighters such as Burkan Al Firat, now controls a contiguous 180 km (110 mile) stretch from Ras al-Ain to Jarablus. Thus from the border of south Kurdistan to Euphrates at Jarablus, the YPG now controls 400 km (250 miles). Their next potential target, the line from Afrin to Jarablus, is 110 km (68 miles) long.

The area between Afrin and Jazeera is home to several different ethnic groups. In Jazeera canton, there are Kurds, Arabs, Syriacs, Chaldeans, Armenians and Chechens. Arabs make up 30% of the population. The Kobani and Afrin cantons are predominantly Kurdish. At Tell Abyad, the Kurds constitute 40-45% of the population. In Jarablus, Arabs and Turkmens are in the majority.

There is no doubt many Kurds dream of a fully fledged, united West Kurdistan from Jazeera to Afrin. But geographic and demographic realities do not lend themselves to the creation of their Rojava. Actually, the Kurdish actors are realists and have been wisely following a road map that incorporates the geographic, ethnic and religious diversity of the region. Kurds owe their recent gains in the region to their cooperation with other ethnic elements. If they deviate from this course, their alliance, particularly with the Arabs, could easily collapse,

The basic motivation of the Kurds was to eliminate the IS threat and secure Afrin as they did Kobani. Control of Afrin had passed from the Damascus regime to the PYD-led Kurdish movement on July 11, 2012. On June 7, 2013, the Kurds took control of Kurdish villages in Afrin’s vicinity from the opposition forces and opened up a corridor to Tel Rifat in the east. Afrin’s population of about 700,000 doubled with the Kurds fleeing clashes around Aleppo. Reinforcing the Kurdish defense became problematic then, because IS was deployed on both flanks of Kobani. Afrin, which is surrounded by Arab and Turkmen, is now under siege by the Islamic Front and Jabhat al-Nusra.

According to Idris Nassan, Kobani’s deputy minister of foreign relations, there are four conditions that must be met for the YPG to cross to the western bank of the Euphrates: Cooperation with opposition forces in the area, the request of the local tribes, a viable threat against Afrin and the continuation of the support by the international coalition.

To Al-Monitor’s query of whether the YPG will cross the Euphrates, journalist Fehim Isik replied, “The Kurds never had plans to advance on the ground to occupy territory. From the outset they have adhered to a policy of security of their area and building a democratic, free structure with the other peoples sharing their area. To have Tell Abyad in IS hands was a serious threat to the Kurds’ and regional security. That is why they went after Tell Abyad. It is possible to predict that YPG will now turn toward Jarablus to eliminate the IS control there. This has nothing to do with building an oil pipeline. It is to build a free and democratic life.”

Veysel Ayhan, the chairman of Middle East Peace Research Center, offered this assessment: “It is inevitable that the Kurdish movement together with the Arabs of the area will try to free the other bank of the Euphrates. If that is not done, the eastern bank of the Euphrates will not feel secure. The YPG had earlier said that ridding Raqqa of IS will be part of their plans. This is why the Kurdish movement is not just an element of defense but a key actor of freedom for the Syrian peoples. That is why opening a safe corridor to Afrin is vital to meet the basic needs and security of the people of the region.”

Although it is possible to shape a partnership with opposition forces against IS, the opening of a Kurdish corridor to Afrin won’t be easy. From Jarablus to Afrin, there is first IS and then Islamic Front domination. IS controls Bab, Menbic, Rai and Jarablus from Raqqa toward Turkey in the north. To the west between Aleppo and Turkey, Azez, Tel Rifat and Marea are controlled by Islamic Front factions. There is also Jabhat al-Nusra, which relies on Turkey and had earlier tried to enter Afrin from the south but couldn’t do it.

There are ideological barriers to the YPG setting up an alliance with the Islamic Front, as it did with Burkan Al Firat forces at Kobani and Tell Abyad. Islamic Front factions reject cooperating with the PYD and YPG because of their leftist ideology and perception as Kurdish militias of the Syrian regime. Turkmen organizations in harmony with Turkish policy brand the YPG as a terrorist extension of the Kurdistan Workers Party.

But fatal blows by IS could compel the Islamist Front to cooperate with the YPG. In recent weeks, IS hit at Islamic Front positions first to capture Soran before turning toward Marea. IS hopes to recoup the loss of Tell Abyad by capturing the Selame border crossing. But the Selame crossing is vital to the Aleppo districts areas under opposition control. The Islamic Front and its allies are in fully mobilized to confront IS’ plans.

Although the Islamic Front might cooperate with the YPG against IS, the last thing the group wants is to share the region with Kurds. A cooperation of necessity may offer Kurds a safe corridor to reach Afrin, but this won’t mean a Kurdish belt or an area of Kurdish control.

The attitudes of the tribes are as important as the positions of other organizations. Although The Kurdish Front operating at Azez is counted as an YPG ally, they have strong reservations about the YPG. Jarablus is predominantly Arab and Turkmen, with a minimal Kurdish presence. The tribes of Jarablus were divided between Jabhat al-Nusra, the Free Syrian Army and IS. When IS captured the town in January 2014, 80% of the population fled to Turkey. Bab and Menbic, controlled by IS are almost totally Arab. These two deeply conservative locations facilitate the operations of Islamist organizations without offering much opportunity to secularist forces like the YPG. Turkmen tribes scattered among about 150 villages at Azez, Bab, Menbic, Jarablus and the mountains also keep their distance from the YPG, even more so than the Arabs.

Syrian Kurdish sources speaking to Al-Monitor say that at the moment, the time for cooperation with Islamic Front factions for the far bank of the Euphrates is not ripe.

The YPG may be forced to cross the Euphrates if Afrin comes under attack. But for IS to capture Afrin, it must first remove the Islamic Front from Marea and Tel Rifat. The threat to Afrin comes not only from the IS. Other Islamist organizations from time to time lay siege on Afrin when they have problems with the YPG.

For the YPG to move against Jarablus, it badly needs the continuation of US air support. The partnership with the United States that started at Kobani has reached to new levels at Tell Abyad. According to a US official who spoke to daily Hurriyet’s Tolga Tanis, the United States, beyond giving close air support to the YPG, is also assisting with the removal of booby traps and mines by a civilian contractor.

The United States has not been able to achieve the level of cooperation it has secured with the Kurds with other opposition forces. Keeping in mind Turkey’s vehement protests, it is not yet clear whether the United States intends to expand its operations in the region.

The Kurds don’t want a Kurdish-Arab or Kurdish-Turkmen confrontation on the way to Afrin. There are no indications of a Kurdish desire to take over the region against the wishes of Arabs and Turkmens. But possibilities such as ethnic cleansing could trigger a Kurdish-Arab confrontation, which in turn could motivate the Arab tribes of Jazeera to cooperate with the regime or other armed groups. This is why Kurds are not expected to take any steps that may threaten all the gains they have made with the other peoples of the area since 2012.