This article was published on Ekurd Daily on 27 August 2017. 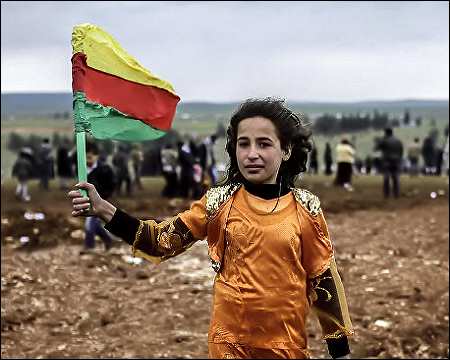 QAMISHLO, Syrian Kurdistan,— Kurdish authorities in Syrian Kurdistan (Rojava) on Saturday began laying the groundwork for the first local elections in the federal system they are establishing in the country’s north, an official told AFP.

Hadiya Youssef, co-chair of the federal system’s constituent assembly, said three rounds of elections would be held starting in September.

“In this phase, we are outlining the electoral process by holding meetings with the local councils and societal stakeholders,” Youssef said on the sidelines of a summit in the Kurdish city of Qamishli.

The meeting brought together Kurdish, Arab, Syriac and other parties to discuss how each of the three electoral phases would be managed.

The first round on September 22, according to Youssef, would see residents vote for representatives on the neighbourhood level.

Elections for executive councils for towns and regions are planned for November 3.

Then, on January 19, they would elect legislative councils for each of the three cantons, as well as a single joint legislative assembly.

“Every region will have its own legislative council, with the prerogative to set laws in the region as long as they do not contradict the social contract,” Youssef said.

Taking advantage of the Syrian army’s withdrawal from swathes of northern territory, Kurdish authorities declared three “autonomous” cantons there in 2013.

Last year, leading Kurdish and Arab parties announced they would establish a “federal” system across the cantons, a declaration lambasted by Syria’s regime, the opposition, and local rivals.

Youssef on Saturday defended the plan, saying it was not aimed at breaking Syria apart.

“Our federal system is geographic and does not aim to divide Syria,” she told AFP.

“The objections from the regime and opposition parties all say that they do not support Syria’s partition — neither do we.”

Syrian Kurdistan’s ruling PYD has established three autonomous zones, or Cantons of Jazeera, Kobani and Afrin and a Kurdish government across Syrian Kurdistan in 2013. On March 17, 2016 Syria’s Kurds declared a federal region in Syrian Kurdistan.

On December 29, 2016 Syrian Kurds and their allies approved a blueprint for a system of federal government in Syrian Kurdistan.

United States regards the PYD and its powerful military wing YPG as key ally against Islamic State and the most effective fighting force against IS in Syria and has provided them with arms, air support as well as the military advisers.

The YPG, which has 60,000 fighters, has seized swathes of Syria from IS.