This article was published on ARA News on November 2, 2016. 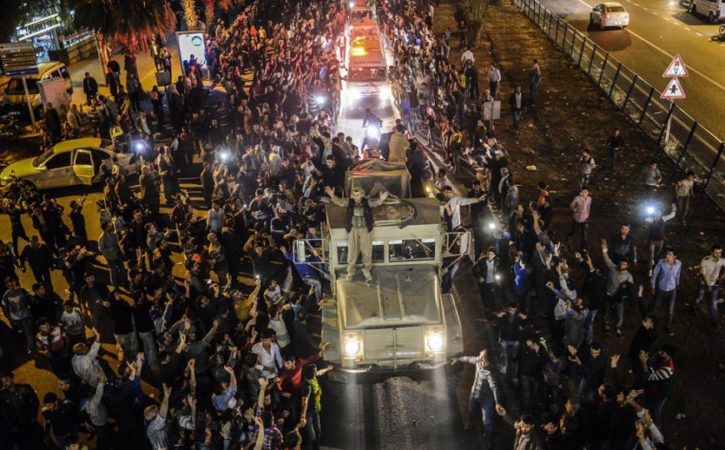 Peshmerga troops heading to Kobane through Turkey, as hundreds of Turkey’s Kurds take to street to salute them, on 1 November, 2014. (Photo ARA News)

Kobane – Co-heads of the pro-Kurdish People’s Democratic Party (HDP) on Tuesday praised the resistance of Kobane during the second anniversary of the fight by the Kurds against ISIS in the Syrian Kurdish city of Kobane celebrated on 1 November.

“It is with pride that we salute the powerful resistance the people of Kobanê and in particular that the female fighters put up on the second anniversary of the historic struggle the Kurdish people waged against ISIS, which constitutes a threat to humanity as a whole,” the HDP co-chairs Figen Yüksekdağ and Selahattin Demirtaş said in a statement obtained by ARA News.

“The city and people of Kobanê that some claimed to be “on the verge of falling”, have now become majestic symbols of all resistance against fascism inspiring hope and spirit of struggle among the peoples of the world,” the HDP added.

ISIS lost at least 4,000 to 5,000 fighters in the battle for Kobane, which lasted for months and was ended due to the heavy resistance of Kurdish fighters and the US-led coalition’s air support.

“In these days when we go through the most chaotic and bloody period that our geography has witnessed since World War Two, we believe the great struggle the people of Kobanê gave against ISIS and the liberation of the city must be remembered over and over again,” the HDP leaders said.

On 1 November 2014, during the siege of ISIS, Kurdish politicians launched the World Day for Kobane with demonstrations of solidarity all over Europe, Kurdistan, and in Turkey. Moreover, more than 150 Peshmergas entered Kobane on 1 November 2014 to back the People’s Protection Units (YPG) that were fighting ISIS. Every year this day is celebrated to not forget the resistance of the Kurdish people against ISIS.

On Tuesday, hundreds of YPG fighters and veterans of the Kobane resistance and civilians took part in activities in Kobane city and in Hasakah Governorate to remember the resistance against ISIS.