Long March from Luxembourg to Strasbourg on day 7 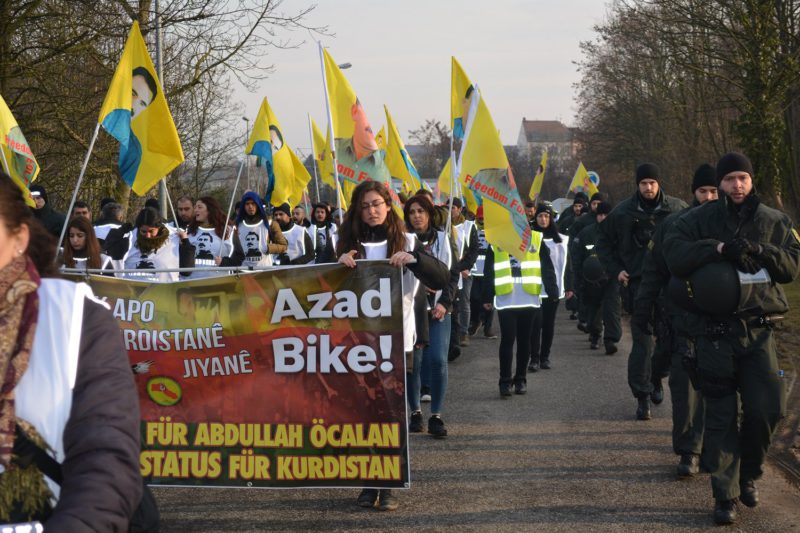 Participants of the Long March that launched in Luxembourg with the demand of freedom for Abdullah Öcalan and status for Kurdistan aim to reach the town of Sarre-Union in Bas-Rhin province today in the seventh day of the action.

Participants of the Long March that launched in Luxembourg with the demand of freedom for Abdullah Öcalan and status for Kurdistan aim to reach the town of Sarre-Union in Bas-Rhin province today in the seventh day of the action.

The demonstrators joining the march, who include 70 internationalist revolutionaries from all around the world, reached yesterday the Loupershouse town in the French province of Moselle, from where they resume their march today.

The marches reached Louperhouse town yesterday after covering a total of 165 kilometers throughout their course with the participation of 15 representatives from Kurdish institutions in Europe and dozens of revolutionaries from Germany, France, Britain, Basque Country, Catalonia, Portugal, Breton, Sudan and Latin American countries.

Kurds living in Metz, Saint Avold and Nancy cities of France and Saarland town of Germany have also supported the demonstrators and accompanied them in the march for one day.

The march participants are exchanging views on international solidarity at seminars and meetings held in the evenings where they stop over. The internationalists are hosted by Kurds where they spend the night throughout their route, and thus get the chance to be closely acquainted with the Kurdish people.

BASQUE DEMONSTRATOR: WE ARE ON A HISTORIC MARCH

A female demonstrator joining the march from the Basque Country stated they did not have any difficulty with regard to their belief and commitment on their action although they are facing some physical difficulties which -she said- is of secondary importance as all the internationalists participating in this action are aware of the fact that they are ‘in a historic march’.

The Basque participant of the march remarked that the Kurdish freedom movement arouse interest and sympathy in the Basque Country for many years now. She said similar problems in Kurdistan and the Basque Country have created a tie between the two peoples, and brought about solidarity.

CALL FOR STRONG PARTICIPATION IN THE MASS RALLY IN STRASBOURG

Another female demonstrator from Germany by the name of Yvonne called attention to the importance of the Long March for the Women’s Movement that demands freedom for Öcalan.

Yvonne reported that they discussed many subjects during the march such as women’s movement, organization of international solidarity and joint struggle.

The German revolutionary laid emphasis on the importance of the mass march and rally to be held in Strasbourg on February 11 to condemn the 15 February 1999’s international plot against Öcalan. She called for strong participation in the rally, stressing that the leader of the Kurdish people’s freedom movement cannot remain jailed.