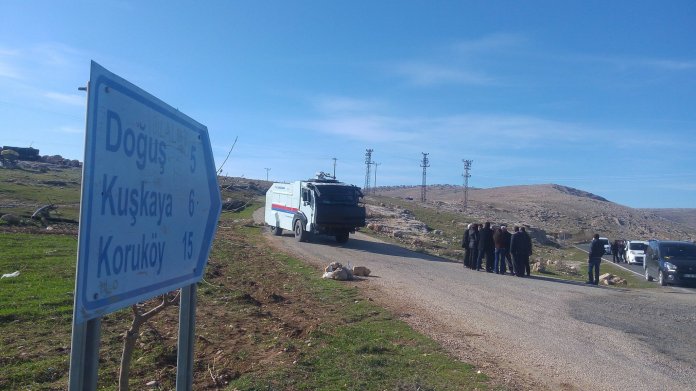 Turkish state forces continue their siege of Xerabê Bava village, of Nisêbîn district, of Mêrdin province, for the 12th day.

The attacks in Xerabê Bava (Koruköy) are carried out under the leadership of Bornova 2nd Gendarmerie Commando Brigade of Turkish Military.

Xerabê Bava is a Kurdish village where humanity is trampled on with all sorts of cruelty being executed by Turkish soldiers.

The siege of Xerabê Bava has been going on for the past 12 days. The Turkish army has committed an astonishing sort of atrocity in the village. While tens of civilians are remaining under the siege, nobody knows how many have been killed or arrested. What is clear, however, is that Turkish soldiers have taken the entire village captive, turning each and every single house into a prison for its population, who are not even allowed to feed their starving animals for the whole duration of the siege.

The life of Xerabê Bava’s population is at an alarming risk. Turkish soldiers have tortured over dozens of its inhabitants in the village’s central squire, killing a few of them with utmost brutality, and while making racist signs they posed for photos at their dead body.

In the meantime, the DBP-HDP-DTK (Kurdish Parties and Organisations) delegation continues their vigil on the way leading to the village where they are blocked by soldiers.

One witness, Vetha Aykut, said: “My husband went back to the village on February 10 to sell our two cows there. The village was placed under siege after that, and he remained there. What I know is that he went to his sister’s house after the siege began. Once they ran out of supplies in his sister’s house, he went back to our house, on the sixth day of the siege, to get something to eat. There he was attacked and violently beaten by state forces who later threw him into the garden. I was talking to him on phone until that incident. I once heard state forces saying ‘Shoot and kill them’ as we spoke. Then the phone went dead. I called a neighbourhood whose phone was also seized by soldiers. I then heard the soldiers saying ‘kill him and throw him in the garden’. He remained in the garden, fainted, for two days. After that, I learned that soldiers went back to our house, covered him in a blanket and took him…“.

Our immediate appeal to international institutions and public opinion is to take required measures against Turkish state’s atrocities in Kurdistan.

We call upon, everyone that identifies themselves as human right defender not to be silent against this cruelty. Silence is complicity.