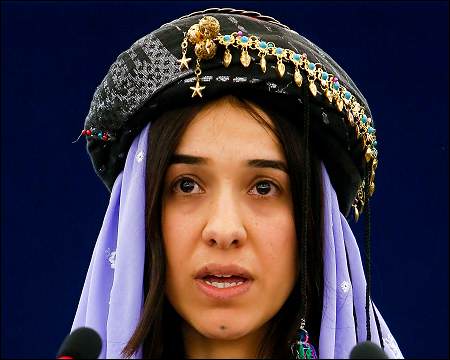 Murad called on Iraqi Kurdistan to reverse the decision, writing on social media that it is a “shame to close the (organisation) that supports my campaign.” AFP reported.

Kurdish security forces closed the Iraqi headquarters of an organisation that aids members of the Yazidi religious minority, which has been brutally targeted by IS jihadists, the YAZDA NGO group said on Wednesday.

Nadia Murad and another Yazidi woman who was kidnapped and repeatedly raped by IS won the European Parliament’s prestigious Sakharov human rights prize last year.

The move by the Iraqi Kurdistan government to close the Yazda organisation’s offices in Duhok drew criticism from Human Rights Watch (HRW).

“A force from the Asayesh raided the main Yazda headquarters in Duhok on Monday afternoon… and ordered the closure of the headquarters and all Yazda projects in camps” for displaced people, the group said in an online statement.

According to Yazda, the government of Iraq’s autonomous Kurdish region accused it of illegal action or “engaging in political activities,” and said that its work permit was expired.

“The Yazda organisation is not political and is not a political entity; rather, it is an organisation defending Yazidi rights in all places,” it said, rejecting the accusations against it.

The Kurdistan Regional Government said that YAZDA  it had been involved in political activities and did not abide by the terms and conditions of Non-Governmental Organizations (NGOs) in the Region, Rudaw reported.

Dr. Dindar Zebari, head of the Kurdistan Regional Government’s High Committee to Evaluate and Respond to International Reports, said on Monday that the closure came after Yazda ignored a warning to abide by the rules of the Kurdistan Region regarding the work of NGOs. Zebari added that Yazda had in some aspects overstepped the boundaries of NGO work.

The Kurdish government’s “authorities need to think hard about the consequences of Yazda’s closure and reverse its decision in accordance with its international obligations to facilitate, not obstruct, humanitarian assistance,” Belkis Wille, Iraq researcher at HRW, said in a statement.

“One person close to the organisation told me he suspected that the decision stemmed from Yazda’s plan to support at least 3,000 families in Sinjar with livelihood materials, as part of a larger United Nations Development Programme (UNDP) project,” she said.

Wille said the programme runs counter to the policy of Kurdish authorities of restricting the movement of goods to Sinjar, a Yazidi area that was attacked by the Islamic State group in 2014.

She said that the Kurdish government sought to explain the policy by saying it fears that goods will end up in the hands of the Kurdistan Workers’ Party (PKK), a Kurdish rebel group opposed to the Turkish government.

Islamic State group has captured most parts of the Yazidi Sinjar district in northwest Iraq on August 3, 2014 which led thousands of Kurdish families to flee to Mount Sinjar, where they were trapped in it and suffered from significant lack of water and food, killing and abduction of thousands of Yazidis as well as rape and captivity of thousands of women.

Those who stay behind are subjected to brutal, genocidal acts: thousands killed, hundreds buried alive, and countless acts of rape, kidnapping and enslavement are perpetuated against Yazidi women. To add insult to injury, IS fighters ransack and destroy ancient Yazidi holy sites.

According to Human Rights organizations, thousands of Yazidi women and girls have been forced to marry or been sold into sexual slavery by the IS jihadists.