On Monday the 23th of October the Kurdish Institute, in coordination with several other organisations and supportive individuals, will launch an new campaign called #SOSTurkey

The goal is to form a broad solidarity network in support for those suffering from the purges and to demand a democritization of Turkey.

Below you will find the platform text for the campaign which is now open for all, both organisations and individuals, to sign!

The campaign will start with several conferences, the first conference “The State of Turkey’s Academia: No space for critical thinking” will focus on the pressure on Academic Freedom, the conference will take place at the University of Ghent on the 25th of October (see poster below). The second Conference will focus on Press Freedom, it will take place at Residence Palace in Brussels on Thursday the 26th of October. After this we will also organize conferences on the targeting of the political oppostion (at the Flemish Parliament on Tuesday the 7th of November), the violations of human rights and the targeting of human rights activists and on the lack of basic rights for various ethnic-religious groups (more information will soon follow). We would like to end the first part of this campaign with a big solidarity event in spring on the repression of civil society and trade-unions. 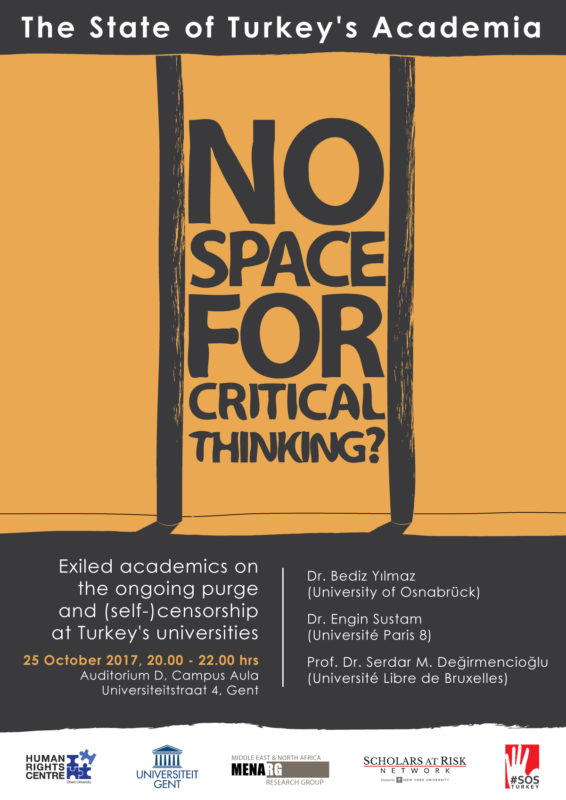 The campaign and the website will be launched on Monday the 23th of October, so we would like to ask to try and sign before this date.

You can sign by sending an email to [email protected]

Do not hesitstate to contact us for more information about the campaign.

Please sign and spread to other people and organisations.