Once We Beat ISIS, Don’t Abandon Us – Sinam Mohamad

Published on the Opinion Pages of The New York Times on May 11, 2017 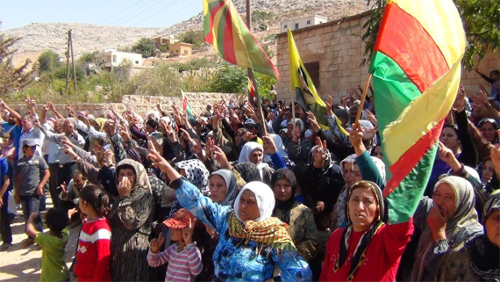 AMUDA, Syria — At long last, those of us struggling to maintain a fledgling democracy in Northern Syria have been buoyed by the announcement from the Trump administration that the American military will begin to directly arm the Kurdish men and women who make up the backbone of the Syrian Democratic Forces. Those forces have been America’s most valued and effective allies in the war against the Islamic State.

This is something we’ve asked for repeatedly during the nearly three years our militias have been fighting the Islamic State and winning, victories achieved despite tough odds and a lack of heavy weapons. We’ve steadily driven the jihadists back hundreds of miles to the brink of defeat at Raqqa. The Islamic State won’t give up its self-styled capital easily. This military aid will be crucial in finishing the job.

But as President Trump prepares to meet next week with President Recep Tayyip Erdogan of Turkey — no friend to the Kurds in Syria or in his own country — we ask the American president and people to be mindful of the enormous sacrifice the Kurdish people have made in this fight, and the importance of the unique democratic system we have worked hard to build in the area of Northern Syria known as Rojava.

We’re fighting the Islamic State because it’s the right thing to do, but we’ve paid dearly for our victories. We have already lost many thousands of our young men and women in battle, and we know many hundreds more will die in Raqqa. Once we win that battle, will America cave in to Turkish pressure and abandon us, despite this sacrifice?

In recent weeks, Turkey has conducted cross-border airstrikes, killing dozens of our fighters whose mission was to resist the Islamic State, and causing American forces who are here to help us to head to the border in a show of solidarity and to keep the peace. But what happens when Raqqa is liberated and the United States moves on? Will America stand silently by if Mr. Erdogan makes good on his threats to overrun the border and decimate Rojava simply because his regime cannot tolerate a pluralistic democracy that includes the Kurds right next door?

Turkey’s hostility to Rojava stems from its long-running conflict with its own Kurdish population. Mr. Erdogan claims we aim to create a Kurdish nationalist enclave from which the Kurdistan Workers’ Party (P.K.K.), with which Turkey has fought for decades, will be able to threaten Turkey.

But our aim is not a Kurdish state. Our People’s and Women’s Protection Units, now fighting with the multiethnic Syrian Democratic Forces, are not the P.K.K.; and allowing conflict with Turkey, a powerful foe, is far from our interest of promoting a federated system of local democracy in Syria. We think the best solution is for Turkey to restart peace talks with Kurdish groups there and to accept that a stable neighbor to the south would be better than one dominated by sectarian chaos.

Not only is our aim to fight against the Islamic State — and not Turkey — but we are also fighting for democracy, for a just and inclusive society in which Arabs, Kurds, Syriacs, Turkmen and other ethnic groups in our diverse area of Syria govern together, where women and men have an equal voice, protected by law. In city after city that we have liberated, whether majority Kurdish or not, we have given residents the opportunity to form their own democratic local governments.

Our democracy, like any healthy political system, is a work in progress. We do not claim perfection. It takes time for people raised under dictatorship to learn the necessary habits of compromise and collaboration. But we also believe that our system could offer a viable model for a future federated Syria, where inclusive government, kept as local as possible, could start to heal the ethnic and religious divisions that have helped prolong this endless war.

Yet, because of pressure from Turkey, the United States has no official political relations with our representatives and has failed to prevent our exclusion from United Nations talks on the future of Syria, which restart soon in Geneva. Worse, we are suffering from a devastating blockade on the Iraqi and Turkish borders that prevents us from obtaining basic equipment essential for our well-being and for rebuilding.

Every day our fighters put their lives on the line for the values of egalitarianism and democracy. We are grateful for military aid, but it won’t be enough to ensure lasting peace. So we call on the Trump administration, Congress and the American people to stand for a federated Syria as a path to peace. We ask for your help in ending the blockade by convincing the Iraqi Kurdish administration that controls the border to allow in the supplies we need to rebuild and to feed the people here, including hundreds of thousands of refugees who have relocated to Rojava.

And we ask you to recognize us diplomatically, to include us in peace negotiations and to give us your word that even after Raqqa’s liberation you will prevent attempts by Turkey to destroy what we’ve built here. In sum, we ask, as a people who have sacrificed a generation of our young to defeat the Islamic State and create a democratic future for Syria: Will you stand by us?