Peace in Kurdistan petition: No Exclusion of Democratic Federation of Northern Syria From Geneva Peace talks 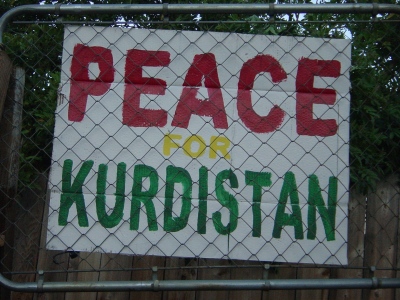 The inclusion of the Democratic Federation of Northern Syria in the peace talks in Geneva is of fundamental importance.  We are concerned that the international community does not betray Rojava and the millions of civilians relying on it for survival. The Democratic Federation of Northern Syria has been at the forefront of the battle against ISIS. It has been the “boots on the ground” for the US led coalition and has fought bravely and paid a high price in the form of personal sacrifice of the highest order in this battle. The repayment has been to be excluded from the Geneva peace talks and to be isolated in terms of humanitarian assistance. It is hard to see this situation as anything other than a political betrayal and as an affront to supporters of democracy and human rights in Syria. The democratic confederal model developed by the Democratic Federation could serve as a model for all of Syria, based as it is on gender and ethnic equality.

Please sign this petition and demand a place at the peace negotiations for those who have defeated ISIS on behalf of all all.