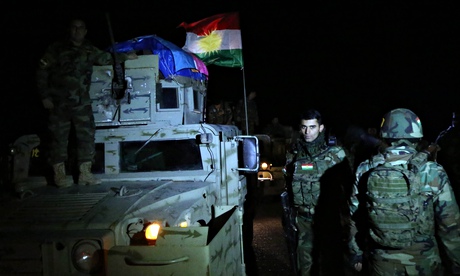 “We have managed to free 3,000 sq km during the last 24 hours,” Massoud Barzani, the president of Iraqi Kurdistan, told reporters on top of Mount Sinjar. “Most of Sinjar is under our control now and with the help of God, we will free all of it.”

The Kurdistan regional government mobilised close to 10,000 peshmerga fighters last week in an ongoing operation to drive Isis from the Sinjar area, which is near the Syrian border.

“Peshmerga forces continue to advance inside Sinjar, engaging and suppressing Isis positions,” said statement from Kurdistan’s national security council. It added that between 250 and 300 jihadi militants had been killed since the offensive began on Wednesday, 50 of whom were killed overnight on Saturday.

Isis has held the area since August, when tens of thousands of people, mainly members of the Yazidi religion, one of Iraq’s oldest minorities, were forced to flee to Mount Sinjar or face slaughter at the hands of the advancing militants.

It was partly the plight of the Yazidi people that forced Barack Obama and the international community into action against Isis.

The US-led coalition air strikes, which began in early August, have intensified over the past 20 days after Kurdish ground forces began attacking Isis positions in Sinjar areas. On Saturday night on Mount Sinjar, the air strikes continued non-stop for more than 12 hours on Isis positions, some of which were visible from the mountain top. Peshmerga fighters there told the Guardian that the past two days had seen the most intensive bombing so far.

“I won’t leave even if I die here. I can’t abandon my soil – we were born here and we will die here,” said Jasso Qawal Rasho, 43, who has nine children and has lived in one of the camps on the mountain for four months. “It is very cold here and people have very little to eat.”

Isis still has a presence in the southern part of the Mount Sinjar but Kurdish fighters say they are confident that once the area is taken, the militants will be forced to leave. Some Isis fighters have retreated back to Tal Afar, west of Mosul.

“I am fighting because I want to be able to go back to Sinjar [town] … I have a house but I don’t know if Isis blew it up – they killed my cousin and they have taken 13 members of my family,” said Arshad Jundi, a 25-year-old Yazidi volunteer who left his wife and child in a refugee camp near Duhok city to fight.

Qassem Shasho, the most prominent Yazidi peshmerga, who has taken part in the recent operation, said this time Isis (also known as Isil or Da’esh) would be forced out of the Sinjar area. “We won’t give up until we free Sinjar and kick out Da’esh … We have not had any martyrs but we have had injuries,” he said.

The latest victories for peshmerga forces and the recapture of northern Mount Sinjar have brought new hopes to the Yazidis who are still stuck on the mountain and want to go back to their villages.

Between 7,000 and 10,000 people – mainly children – have been sheltering on top of the mountain in five camps with no running water or electricity for months.

On Friday, peshmerga forces prepared a corridor for them to escape, once the route was secured. On Sunday, several refugees said they would not leave the mountain until their villages south of Mount Sinjar were freed.

The arrival of Isis in Sinjar has also caused rifts within different religious and ethnic groups who lived side by side for many decades. Many Yazidis blame their Arab neighbours for collaborating with the militants. The village of Barzanka, near Zumar town, where the peshmerga claim some residents aided Isis fighters, has been flattened, with only the mosque left standing.

“I do not want a single Arab to stay in the area – they have committed treason against us twice: once during Saddam and this time,” said Hazem Hamza, 32, a Shia Kurd from Sinjar who has been a member of the peshmerga for seven years. “My uncle’s family were killed by Da’esh in Sinjar when they attacked the town.”

On the hill overlooking Sinjar town, a canopy of smoke formed above the town after the frequent air strikes from manned and unmanned coalition planes as well as fighting on the ground.

The Guardian saw several peshmerga fighters injured in the fight for Sinjar being treated by the Red Crescent on the mountain.

Peshmerga fighters, members of the Kurdistan workers’ party (PKK) and the people’s protection units (YPG) from Syria, and the Yazidi armed units have taken part in the latest attack on the ground, while coalition aircraft have provided air cover. On Sunday, US-led forces conducted 13 air strikes in Iraq and three in Syria against Isis targets, the US military said.

Shiyar Shixo, a 23-year-old PKK fighter who participated in the fighting in Sinjar, said four of his comrades had been injured in the fight. “We will fight Da’esh with will and determination until the whole of Kurdistan is free,” said Shixo, who has lived on top of the mountain with a group of PKK and YPG fighters for the last four months.

The British government has dropped humanitarian aid to the refugees on the mountain and RAF Tornado jets have bombed Isis positions in and around Mount Sinjar.

According to one senior Kurdish peshmerga officer, who spoke on condition of anonymity, UK military advisers have been involved in the latest offensive against Isis. The officer said he had seen British military personnel advising the peshmerga in Zumar, Nineveh province, in their push for Sinjar.

As the fighting continues in Sinjar, the refugees on top of the mountains are more worried about the freezing temperature. Sino Abdi Aassem, 73, who lives in a tent dropped from British planes in the summer, said he was grateful for the help from the international community but added that they desperately need more.

“We eat bread and water and if we are lucky we have some pasta. We need more tents and food,” he said.

Published by The Guardian