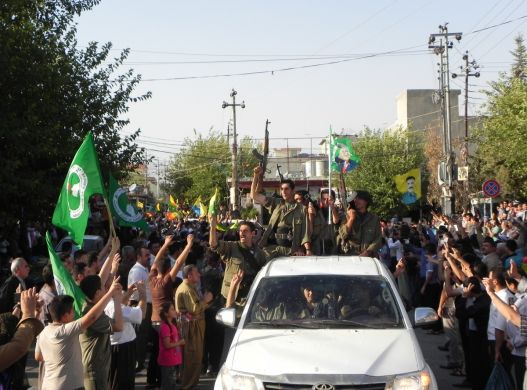 HPG (People’s Defense Forces) guerrillas who have sent significant forces to defend Maxmur near Hewler, have also dispatched a detachment to Kirkuk, which also faces the ISIS threat.

In every village and town the guerrillas passed through they were greeted enthusiastically by the people, who shouted slogans such as ‘Long Live President Apo’ and ‘We will die for you’. Mothers had tears in their eyes and in some places the guerrillas were thrown sweets. The arrival of guerrilla resistance units to assist in the defence of Kurdistan has created great trust amongst the people.

South Kurdistan has been the target of unprecedented attacks since the beginning of August. ISIS, which has been attacking the Rojava revolution for 2 years, has now launched a wave of attacks on South Kurdistan. After attacking peshmerga forces in Zummar on 2 August, the gangs attacked Rabia and Sinjar the next day, forcing hundreds of thousands of people to flee. The gangs also seized the Christian town of Qaraqosh, causing tens of thousands of Christians to flee.

Following these attacks YPG forces intervened, advancing rapidly to assist those stranded on Mount Sinjar. On 4 and 5 August the HPG and YJA Star also sent units.

On 6 August the gangs attacked the town of Maxmur (Makhmour) 40 km to the south of Hewler (Erbil). The guerrilla forces evacuated between 12 and 15 thousand residents of the Maxmur refugee camp while a militia force was set up. A day later HPG and YJA Star forces reached Maxmur from the mountains of Kurdistan and a joint defence force of militia, guerrillas and peshmerga was established.

The Maxmur area has strategic importance as regards the defence of Hewler. On 8 August further guerrilla reinforcements were despatched to Maxmur.

In response to the threat of massacre posed by the self-styled Islamic State gangs, guerrilla units were sent to Kirkuk on 9 August. The guerrilla convoy was greeted joyfully by the people as it passed through Rania and Sangasar before reaching Kirkuk.