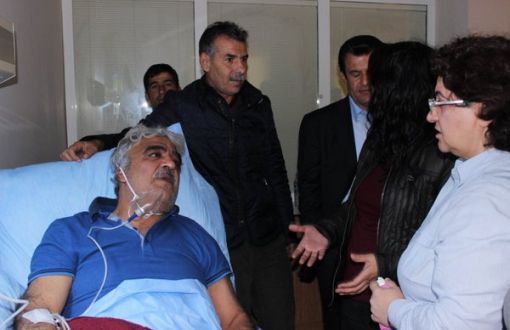 Published by BIA News Desk 23 November 2015
HDP deputies from Mardin, and DBP Co-Mayor Ahmet Türk and DBP Co-Chair Emine Ayna who are on hunger strike to protest curfew in Nusaybin have been blocked by police intervention as they tried to enter the district.

Police have attacked with pressured water and pepper gas against politicians, mayors, and trade boy representatives trying to enter Turkey’s southeastern Nusaybin district in Mardin province in the 10th day of curfew.

Five civilians have been killed in the police operations during the curfew which was declared on November 10.

The group started marching towards Nusaybin where the curfew is ongoing. Police not allowing the group to enter the district intervened with pressured water and gas.

Mithat Sancar from HDP has been taken to Nusaybin State Hospital after he was badly affected by gas.

Curfew was declared by sub-governorship in 15 neighborhoods of Turkey’s southeastern Nusaybin district in Mardin province to be effective as of November 13. End time of the curfew is yet to be announced.

Fırat News Agency wrote that Selamet Yeşilmen, whom the agency stated as pregnant lost her life resulted by fire opened from armored vehicles. In the incident, four people including two children wounded.

Nusaybin Sub-Governorship in written statement said injuries and killings resulted by “shrapnel pieces”, rejected the allegations that police were the cause.

In the 5th day of the curfew, 65-year-old Süleyman A. on his way to his daughter’s home was wounded by police fire and taken to hospital. Nusaybin is one of the 10 districts of Turkey’s southeastern province of Mardin. The population is 97,156. Its southern neighboring country is Syria.

Its Co-Mayors are Sara Kaya and Cengiz Kök from Peoples’ Democratic Party (HDP).