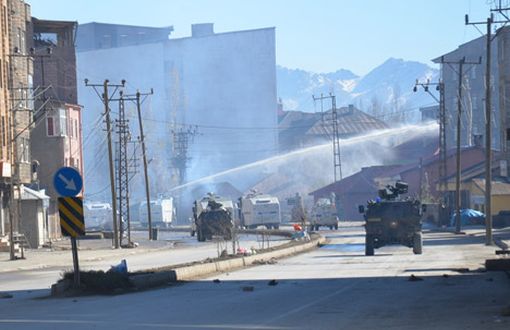 * Photo: Yüksekova Haber
Published by BIA News Desk 23 November 2015
Police Intervention in Funeral in Turkey’s Southeast Yüksekova District
Police have intervened in people gathered for funeral of two people who lost their lives in the police operations during curfew in Yüksekova.

Two people named Mehmet Reşit Arıcı and Naim Nuyan lost their lives in the police operations during the curfew in Yüksekova.

Thousands learning the bodies were brought to the district and wanted to attend the funeral gathered on Şemdinliyolu street. Police attacked on the group with pepper gas, pressured water and plastic bullets.

The funeral cortege went to the mosque through alternative roads upon the police intervention. The body was set off for the cemetery.

Peoples’ Democratic Party (HDP) deputy from Hakkari, Nihat Akdoğan trying to participate in the funeral has been blocked by soldiers at Yeniköprü Gendarmerie Check Point. Yüksekova is one of three districts of Turkey’s southeastern province of Hakkari. It is located on the junction of Tukish-Iranian-Iraqi border.