Pro-Erdoğan association head calls on supporters to take up arms 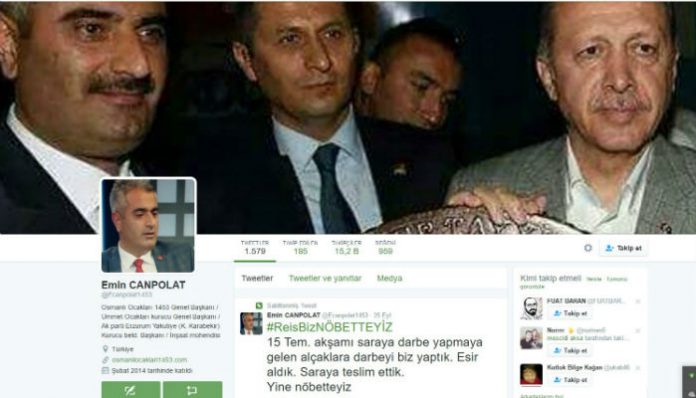 The chairman of Ottoman Hearths 1453, Emin Canpolat, has called on all supporters of the Justice and Development Party (AK Party) and President Recep Tayyip Erdoğan to take up arms in the event of a second coup attempt in Turkey.

Turkey experienced a failed coup attempt on July 15 that claimed the lives of more than 240 people and injured a thousand others.

“This is an announcement to all acting with us. Take up arms for the homeland, for our flag and for Erdoğan,” Canpolat wrote on his personal Twitter account on Thursday.

His message drew support from AK Party trolls on Twitter, and the hashtag “AKsilahlanma” (AKarmament) was a trending topic on Twitter for many hours on Thursday.

However, he continued to post similar messages from the Twitter account of Ottoman Hearths 1453 later in the day and said people should confront another coup attempt with weapons.

In a series of Twitter messages, he wrote: “The nation prevented the coup attempt on July 15. Our nation has woken up. Get used to this. There is no longer the old Turkey. The nation stood behind its homeland. … We did not take to the streets with arms in our hands [on July 15]. We only could have died and become martyrs. But in the event of another coup attempt, we will not go out with empty hands. We will both give our lives and take lives. If the matter is the homeland or Erdoğan, the rest is trivial.”

Ottoman Hearths 1453 is a pro-AK Party organization. The Twitter page of the organization features many photos of Canpolat and Erdoğan standing side-by-side.

This article originally appeared in Turkish Minute on October 20.