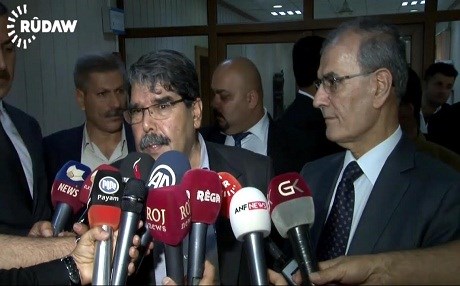 The co-leader of the pro-Kurdish Democratic Unity Party (PYD), Salih Muslim and Kirkuk Governor, Najmadin Karim in Kirkuk on Sunday.

KIRKUK, Kurdistan Region— The leader of the Kurdish Democratic Union Party (PYD) welcomed the opening of the Semelka border crossing between the Kurdistan Region and Syria’s autonomous Kurdish region of Rojava on Sunday, describing it as a “good step”

“The gate is now open for transfer of food and medicine and I hope it remains to be open for the needs of the public,” PYD leader Salih Muslim told reporters at a press conference in Kirkuk.

Muslim who visited Kirkuk governor Najmaldin Karim said that he hoped the border crossing would not be used for “political scoring,”

The Semelka border crossing, the only route from the Kurdish enclave in Syria into the Kurdistan region, was reopened last week to facilitate the movement of “humanitarian aid, foodstuff and medical help,” according to officials in Kurdistan region.

Deputy trade minister of the Jazira Canton of Rojava also welcomed the border opening last week, which he hoped would connect his region to the outside world through trade.

Hamo added, “We were hoping that the opening would be different, for our businessmen to bring goods and items into Rojava and sell it cheap to people here.”

The PYD leader accused Turkey in the same press conference of “continued support” for Islamic State (ISIS) militants across its southern borders.

“Some routes had been closed while others were opened,” he said, adding “Turkey is still assisting the ISIS. They now provide their aid through other routes into Syria,”

Ankara has in the past been accused of facilitating the flow of arms and recruits into ISIS-held territories in Syria but it has categorically denied all claims.

Turkey has been an outspoken opponent of the Syrian regime in Damascus and backs the mainly Sunni anti-government forces in the country.