On Thursday 2 June, the Kurdish Institute organized a successful Inter-Parliamentary Working Group (IPWK). For this occasion, we had one of the impressive committee rooms of the Chamber of Representatives at our disposal, more specifically the Marguerite Yourcenar room in the fairly new Forum building.

The pressing topic of this IPWK was focused on the global threat and acute threat posed by Islamic State (ISIS) in northeastern Syria. The major incident with ISIS in Hasakah (January 2022) – and the many smaller incidents that followed – prove once again that the situation in the Autonomous Administration of Northeast Syria (AANES) is a ticking time bomb and poses a real danger, not only to the region, but for the whole west.

The Syrian Democratic Council has been pointing out this grave danger for years. In a recently released detailed report, they not only describe the global threat, but also formulate concrete solutions to avoid this crisis.

Video conference with direct testimonies from the AANES was not possible – for security reasons. The Kurdish Institute therefore invited the following speakers who were physically present:

Both Rhodi Mellek and Khaled Issa underline the particularly hypocritical role that Turkey plays. Although Turkey is a NATO partner, it continues to harass the region concerned. It concerns deliberate aggressions to destabilize the AANES. Worse, there is evidence that the Turkish regime played a major role in fomenting the recent incidents between ISIS and the Syrian Democratic Forces. Under the guise of “fighting terrorism”, Turkey is in league with the world’s most dangerous terrorists. ISIS takes advantage of the escalated attacks by the Turkish occupation. 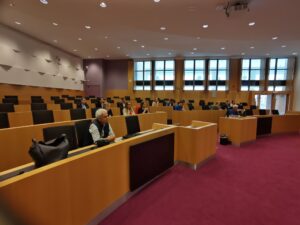