Rojava Goes To The Polls

Voters in 12 cities across the Cizîrê Canton of Rojava went to the polls yesterday in order to elect municipal councils, explains an article in Özgür Gündem. Polls opened at 8:00 AM local time and voters were able to cast their ballots until 08:00 in the evening. 160 polling stations were opened in Dêrik, Girkê Legê, Tirbespiyê, East Qamişlo, West Qamişlo, Amûdê, Dirbêsiyê, Serêkaniyê, Hesekê, Til Koçer, Çilaxa and the towns of Ebu Raseyn. The voting marks the first time free elections have taken place in the region on this scale.

The voting took place as YPG/YPJ and allied forces were defending the canton from an ISIS offensive along a 180 km front from Serêkaniyê on the Turkish border to Til Hamis close to the border with Iraq. The Rojava Public Protections Forces (Asayiş) in cooperation with the Syriac Public Protections forces affiliated with Sutoro provided security for the voting. A delegation from South Kurdistan was also present in Rojava in order to monitor the elections. 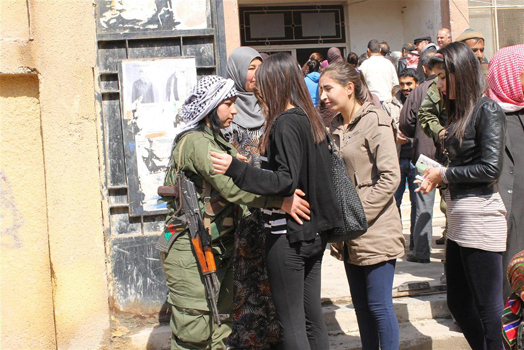 The voting was marked by high levels participation and a general atmosphere of excitement. The Cizîrê Canton co-president Hediye Yusif congratulated those taking part in the election on behalf of the entire canton administration, saying “the elections have cemented the legitimacy of the administration of democratic autonomy.” Rêzan Gulo, the president of the association for the Families of Martyrs, noted that candidates had been chosen based on their will to pursue freedom, adding that “without a doubt these elections took place thanks to our martyrs who sacrificed their lives so that the peoples of this region could live in freedom and democracy.”