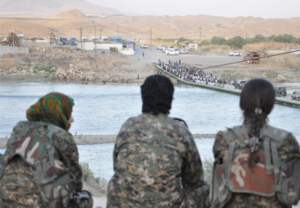 Syrian Kurdish fighters observing Semalka crossing on the Syrian side of the border. File photo

KOBANE – A delegation from Rojava’s Auto-Administration, led by Syrian Kurdish politician Aldar Xelil, met with a delegation from the Kurdistan Democratic Party (KDP) of northern Iraq to discuss the closure of the Semalka border crossing.

Since 16 March, the Kurdish government in Iraq has closed the border between Syria’s Kurdish region [Rojava] and Iraqi Kurdistan. This is due to political differences between the Democratic Union Party (PYD) and the KDP. The closure of Semalka crossing has reportedly caused an economic crisis in Rojava.

On Tuesday, TEV-DEM co-head Aldar Xelil met with Hamid Darbandi, a high-level KDP official responsible for the Syria file, and Shawkat Berbihary, the head of the Kurdistan region’s border crossing.

The two sides did not release any statement regarding the meeting and it’s unclear whether the border would be reopened.

Officials of the KDP-backed Kurdish National Council in Syria (KNC) do not expect the border to be reopened soon.

Ni’mat Dawud, leader of the Kurdish Democratic Equality Party in Syria agreed. “The Kurdistan region opened the border to help people, but the PYD wants to control it and does not want to share power with other Kurdish factions in Syria,” he told ARA News, speaking about previous failed agreements between the KNC and the PYD under the sponsorship of Iraqi Kurdistan’s government.

However, officials from the PYD party blame the KDP’s economic relations with Turkey, and suggest Turkey pressured the KDP to close the border crossing of Semalka.

“Closing the border with Rojava is not related to the Kurdish government, but to the KDP. The other parties like Gorran and the PUK are against it, it’s only the KDP,” said Abdulkarim Omer, foreign relations head for the PYD-led Auto-Administration.

“The decision does not come from the KRG [Kurdistan Regional Government of northern Iraq], but from the Turkish government, and the KDP is part of the coalition of Saudi Arabia, Qatar, and Turkey,” Omer said in an interview with ARA News.

Amjad Othman, an independent politician from the Kurdish Reform Party, suggested that the border between Rojava and Iraqi Kurdistan was closed due to pressure from foreign powers.

“Now we need international pressure for it to be reopened again,” he told ARA News. “The opening of the border will not be soon,” he added.

However, the meeting between the KDP and Syrian Kurdish officials shows that it might be possible that the border closure might be softened or removed after negotiations.

The border closure has led to high food prices, lack of goods, and complaints among the civilian population in Rojava.

“While I’m sure the KRG has a perfectly reasonable-sounding explanation for this, possibly similar to past explanations I heard placing responsibility for the closure on the PYD, I think it really boils down to pressure from Turkey and the KDP’s worries about PKK-aligned groups expanding their influence and appeal in the region (especially in places like Shingal, for instance),” David Romano, chair of Middle East politics at Missouri State University, told ARA News.

“The border offers the KDP a way to look sympathetic to Turkish concerns and to pressure the PKK-aligned groups, at the cost of some sympathy from a Kurdish population that is in general very sympathetic towards compatriots in Rojava,” he added.

Speaking to ARA News, Michael Stephens, head of the RUSI think-tank, said that the border closure is part of the ongoing problems between the PYD and KDP over ideology and power.

“The PYD claims that the closure of Semalka crossing is a result of Erbil’s relationship with Turkey, which it believes has forced the KRG to shut off Rojava. Meanwhile the presence of YPG and YBS forces in Sinjar [Shingal] in northern Iraq is a source of great annoyance to the KDP, and is seen as an attempt by PKK-aligned forces to forcibly take land in a country which is not theirs,” Stephens said.

“Ultimately both sides have legitimate grievances, but seem unable to put their differences aside and are playing maximalist politics, which has broken down all the remaining goodwill from the Duhok agreement [signed between Syrian Kurdish parties in October 2014],” he added.