Russia and US ‘planning military coordination against Isis in Syria’ 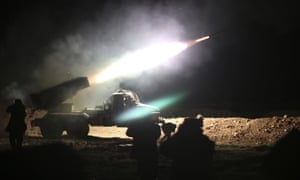 Russia and the US are working to liberate the Islamic State stronghold of Raqqa, says Russian deputy foreign minister.

Signs of wider military cooperation in Syria have emerged as Russia revealed that discussions have taken place about coordinating the liberation of the Islamic State stronghold of Raqqa in conjunction with the US.

Russia and the US have slowly been working more closely in the wake of the partial Russian withdrawal of its aircraft from Syria, including an agreement last week to press President Bashar al-Assad to hold talks with the opposition about a political transition once peace talks recommence after 9 April in Geneva.

Russia and the US are discussing “concrete” military coordination to liberate the Isis stronghold of Raqqa, Interfax news agency cited the Russian deputy foreign minister, Oleg Syromolotov, as saying on Wednesday. The revelation follows visits to Moscow this month by the US secretary of state, John Kerry, and CIA head John Brennan.

In a separate development Assad told the Russian news agency RIA he could foresee agreement on a political settlement for Syria within weeks, a timetable that runs ahead of anything that has been discussed in Geneva. Giving his first response to the first round of Geneva peace talks, Assad told RIA that it was “logical for there to be independent forces, opposition forces and forces loyal to the government represented there”.

But he seemed to hold out against the formation of a transitional governing body with full executive powers, even though this is proposed as part of the UN roadmap and is the key demand of the opposition. Assad said: “Neither the Syrian constitution, nor the constitution of any other country in the world, includes anything that is called a transitional body of power. It’s illogical and unconstitutional.”

“There are many questions that need to be discussed in Geneva, but there are not difficult questions,” Assad said. “I don’t consider them difficult, they can all be resolved.”

The Syrian opposition maintained that Assad must go as as part of any arrangement, though. “The government, whether it’s new or old, as long as it is in the presence of Bashar al-Assad, is not part of the political process,” said George Sabra, a negotiator for the High Negotiations Committee representing the opposition at the Geneva peace talks.

“What Bashar al-Assad is talking about has no relation to the political process,” said Sabra.

Assad said a preliminary draft version of the constitution could be drawn up “within a few weeks”, but added the country would only adopt a new constitution “after the Syrian people vote on it”.

He insisted the government delegation “displayed flexibility” at the Geneva peace talks with the opposition “in order not to miss a single chance” for settlement. He said the conflict had cost his country $200bn.

His remarks may reflect pressure being placed on Assad to show flexibility by Moscow in the wake of a meeting last week between Kerry and the Russian president, Vladimir Putin.

The tone of the Putin-Kerry meeting was warm enough to suggest that Putin believed America had come to recognise the legitimacy of the Russian position in Syria, and closer coordination between the two countries was likely.

Retaking Raqqa, the de facto capital of Isis, is also the obvious but daunting next military step following the Syrian army’s liberation of Palmyra from the group in the past week.

The 555th Brigade of the Syrian Arab Army’s 4th Mechanised Division has gained ground in north-east Syria and is arguably closest to Raqqa, moving to the strategic Tabaqa military airport. The Pentagon has recently expanded its airbase in Rmeilan in Syria’s northern province of Hasakah. It would probably coordinate any offensive with Kurdish and possibly Saudi forces.

Both Russia and the US would be eager to see their own sponsored forces liberate Raqqa, partly to ensure their hand is strengthened at the negotiating table. The area is also rich in oil.

But a long predicted race to Raqqa to free the city is in neither Moscow or Washington’s interests if in reality their approach to a peaceful settlement in Syria is gradually coming closer together.

Russia and the US military in Geneva have been working together on monitoring and enforcing the ceasefire, gradually creating an atmosphere of greater trust between the two sides. There have been long standing deconfliction agreements to ensure that western-backed airforces do not clash with Russian forces in the skies above Syria, but there has been no direct military co-operation.

Most observers do not expect Isis to collapse militarily for many months, although there are reports of growing internal conflicts within the group, including between foreign fighters and Syrian Sunni fighters.

Russia, which provided vital air support for the army assault on Palmyra, said earlier this week it was sending militant engineers, sniffer dogs and “demining robots” to help defuse explosives in the old city.

Interfax news agency said the deployment of Russian military engineers in Syria would be completed in early April, and that more than 90 personnel would be sent to Syria for the work.

In his message to the UN secretary general, Ban Ki-moon, Assad renewed Syria’s offer to cooperate with “all sincere efforts” to combat terrorism, the Syrian news agency said. “This moment might be the most appropriate to accelerate the collective war against terrorism,” it quoted him as saying.

Syrian government forces and their militia allies, backed by further Russian airstrikes, have targeted two towns to the east and west of Palmyra since Sunday, seeking to eliminate Isis from an expanse of desert in the centre of the country.

They have bombarded and virtually surrounded the town of al-Qaryatain, state media have reported. Heavy airstrikes have also hit the town of Sukhna, to which many Isis fighters retreated when they pulled out of Palmyra.