SDF announces the launch of ‘Great Battle’ for Raqqa 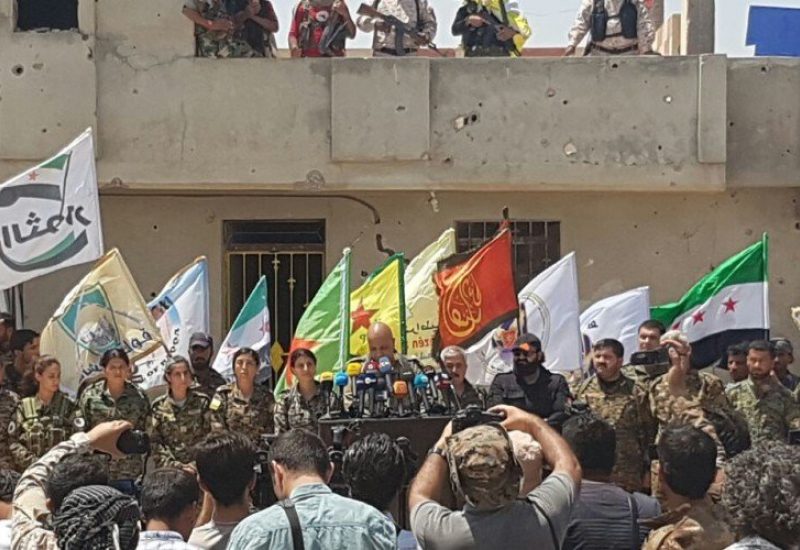 The Syrian Democratic Forces (SDF) General Command announced the launch of the ‘Great Battle’ for the liberation of Raqqa from ISIS.

On behalf of the General Command of SDF, the historical statement was announced to the world with the following words:

“After a long struggle, our forces and the forces carrying out a joint struggle against terrorists have marked in history their legends of heroism. From the historical resistance of Kobanê to the liberation of Girê Spî, Hawl and Shaddadi, to the villages of Deir ez-Zor and Raqqa, and to the dams in these regions, many historic steps have been taken for the liberation of the people in these regions from the terrorists and the fulfillment of their vital needs within existing resources.

Today, in the name of the Operations Room Wrath of Euphrates Command, we announce that we have launched the “Great Battle” for the liberation of the city of Raqqa, which the gangs have made the capital of terror and terrorism. The great battle will begin with the participation of the YPG/YPJ, Army of Revolutionaries (Jaysh al-Thuwar), Jabhat al-Akrad, Democratic al-Shamal Brigades, Tribal Forces, Maghawir Humus Brigades, Siqur al-Raqqa, Liwa al-Tahrir, Seljuk Turkmen Brigade, Sanadid Forces, Syriac Military Council, Manbij Military Council, Deir ez-Zor Military Council, Self-Defense Forces, Nuxbe Forces.

We announce the good news of the start of the Great Battle which aims to liberate Raqqa city, and we declare that our forces are ready for the fight with high morale and great preparations. We state that the battle plan which has been discussed with our partners on the ground, the International Coalition, is ready to be implemented. As seen in the attacks against Karachok, many forces have made intensive efforts to prevent this historic campaign, but this attack and futile efforts have all been wasted. Contrary to what these opposing efforts and attacks aim at, we have strengthened our will, further knowing our hatred against terrorism and increased our struggle will against it. In this sense, each Karachok martyr has become a torch illuminating our way. Staying attached to the memories of the Karachok martyrs, we will conclude this great battle successfully and present this historic victory to the souls of our martyrs.

Once again, we call on our people in Raqqa to stay away from the enemy’s centers, vulnerable spots and conflict areas. We call on our people to gather around our forces and help them so that they can fulfill their duties. We are also urging the youth of Raqqa to continue their participation in our forces to liberate the lands they live in.

In this historic day, we respect our martyrs who sacrificed their lives for us to arrive to the stage where we are now, and we wish our heroes a quick healing process. Once again in the name of the Operations Room Wrath of Euphrates, we salute the fighters and commanders of all the forces and groups involved in the Great Battle. We also express our thanks to the International Coalition Forces.

We also greet our people of all sects and religions who resist the terrorists, and the press workers who share the developments in the war zone with the public and are with our forces for live footage.”