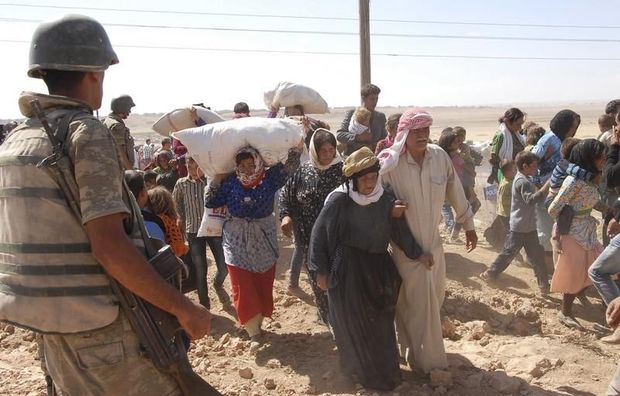 TO INTERNATIONAL PUBLIC OPINION AND OUR ÊZÎDÎ PEOPLE,

Jan. 14, 2015
On January 14, Wednesday, which is considered a sacred day by the Êzîdî people, we held our conference at the foot of Mount Sengal (Sinjar).
Close to 200 delegates from the Newroz refugee camp in Dêrîk (Rojava), refugee camps in southern Kurdistan (Iraqi Kurdistan) and from Mount Sengal, where our people struggled to survive for 6 months, participated in the event.

Representatives of the KCK (Union of Communities in Kurdistan), PUK (Patriotic Union of Kurdistan), the Communist Party, TEV-DA (Democratic Movement of the Êzîdîs), Partiya Êzîdîyen Pesveru (Party of Progressive Êzîdîs), and Tevgera Êzîdîya (Movement of Êzîdîs) participated and delivered their messages.
While the causes of the 73rd massacre in our history, which was even more severe and tragic than the 72nd, were discussed extensively, we reached the conclusion that one cause of this massacre was the lack of organization which led to the vulnerability of the Êzîdîs. Therefore, one aim of this conference was to assert the political social mobilisation and will of the Êzîdî people, as well as the need for self-defence forces, which was exposed in a tragic way in the 73rd massacre.

Our conference agreed to make 3 August the International Sengal Day, due to the 73rd massacre which the Êzîdîs lived through on 3 August, 2014.

We, the Sengal Êzîdîs, have established our Founding Council with this conference. It is also obvious that the Êzîdîs, who are dispersed over four parts of Kurdistan and abroad, required a common organization and mechanisms. However, due to the urgency of the situation, we felt the need to establish a common platform for the Sengal Êzîdîs as a first step. After the most recent massacre, the Êzîdîs of Sengal were subject to a massive wave of forced displacement, which has cut them off from their homeland. It was very important to reach our people and to ensure their participation in this conference. That is why the participation and representation of people from the Newroz camp (Syria), the southern camps (Iraq) were highly valued, while it is unfortunate that we were not able to reach the Êzîdîs in the northern camps (Turkey), as well as large parts of the Sengal population. In this sense, our council, as it has the function of a founding council, aims to reach out to people who did not participate, and to secure their representation.

Our conference managed to create an administration that will govern ourselves, handle our own affairs, and express our interests and decisions as Êzîdîs. A council of 27 people and an executive council of 7 people were established.

We decided to form 6 main committees –for defence, diplomacy, mobilization, finance-economy, women and youth. The executive committee will work through these committees.

Our Êzîdî people once again evaluated the lack of a united self-organisation system and own defence organisation, which leaves us dependent on others’ protection, as our main weakness. As a result, thousands of women and children were captured by the fascist forces of the Islamic State, ten thousands of our people were displaced and suffered misery and tragedy. In this sense, our Êzîdî population decided at the conference that our self-organization requires our own defence organisation and system. Thus, in order to strengthen the Êzîdî people’s self-defence organisation, the Sengal Resistance Units (YBS), we invite Êzîdî youth, Kurdish youth and all those, who want to struggle for human dignity, to join the ranks of YBS.

We invite all parties of Kurdistan that already take part or want to take part in the Sengal resistance to unite under a joint command and in a common struggle, in order to achieve more effective results against our enemies.

With this conference and the self-administration that we established, we want everyone to recognise the will of our community and to accept that we will manage our own affairs. In this context, our conference called for the self-organisation and administration of all Êzîdîs everywhere.

Our conference regards it as a duty for all forces in Kurdistan to show support and solidarity with the Êzîdî community, independent of political parties, communities or narrow tribal or partisan interests and expect them to recognise and support the decisions and will of the Êzîdî community.

Again, we call on all international forces, humanitarian organisations and individuals and urge them to support the Êzîdî community, which has become the resistance of humanity against the fascist forces of ISIS, an enemy of humanity.

Moreover, we call on all international organisations and bodies, to investigate the fate of the Êzîdî women and children which are held hostages by the Islamic State and to set up an independent commission of inquiry.

Down with the barbaric ISIS fascism!
Long live the Sengal resistance!