Silvan under lockdown for 10th day 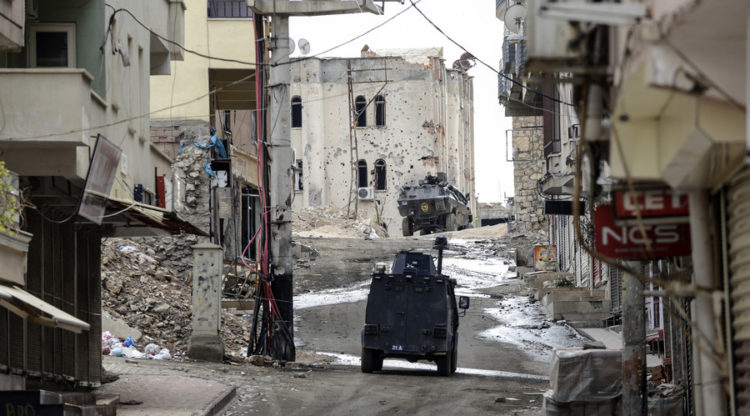 Thousands of people living in a southeastern town in Turkey have been stuck their homes for over a week now due to a curfew imposed and clashes between security forces and militants of the outlawed Kurdistan Workers’ Party (PKK).

The latest casualty in Silvan, located some 80 kilometers east of the Diyarbakır city center, came yesterday when a lieutenant was killed in the town where a curfew has been in place in three neighborhoods since Nov. 3.

Since then, at least two special force police officers and five civilians – or militants – were killed in the town in operations launched to fill the trenches dug by locals to prevent security forces from entering the neighborhoods. While security forces consider the existence of trenches as an unacceptable security breach, locals argue that the existence of the police and soldiers in neighborhoods puts the lives of civilians in danger due to the raids of suspected militants’ homes, during which security forces have often been accused of using excessive force. The people in Silvan, or in other troubled towns in the region such as Cizre, are unfortunately no stranger to curfews. When the operations targeting the PKK militants in the town centers, who are said to be members of the outlawed group’s youth wing the Patriotic Revolutionary Youth Movement (YDG-H), were launched in July, curfews and siege of neighborhoods have been used as common methods by security forces.

The current one is the sixth curfew imposed on Silvan in the last four months. In addition to the curfew, the citizens in the troubled towns often lack electricity and water, while communications, including cellular phones, the Internet and often land lines, are down. Delegations formed by politicians and/or journalists, are not allowed in the neighborhoods under curfew.

I was in Silvan as part of a delegation of journalists, including the chairmen of the country’s two major media labor unions, in late August. A curfew was declared on Aug. 24 in the town, just when we were at the municipal building trying to learn about the situation.

When the journalists wanted to visit the neighborhoods under curfew, which according to the municipal officials were home to over one-third of the town’s population of some 90,000, they were stopped by an armored police vehicle. They were told to “disperse at once or else…” and forced to return to the municipal building and leave the town.

According to the latest information from Silvan, military vehicles and tanks are now a part of the ongoing operations. As of yesterday, many photos shared on social media showed tanks on the town’s streets, and the killing of a lieutenant is a proof that the military is now actively involved in the operations, which were initially carried out by the police. The digging of trenches, usually accompanied by barricades with armed militants standing behind or declarations of autonomy and de facto self-rule, cannot be accepted in a sovereign state. But what is also unacceptable is the total punishment of citizens in the clash zones during the struggle against armed militants. A peace process, in which the imprisoned leader of the PKK, Abdullah Öcalan, was a prominent figure, is now over. But its alternative is not an all-out war on Kurds because the PKK is waging an armed struggle in their name.

The Nov. 1 election results showed that many Kurds in the east and southeast and in major cities who voted for the Peoples’ Democratic Party (HDP) either abstained from voting, or voted for the Justice and Development Party (AKP). The main reason behind this shift was the circle of violence fueled both by security operations and PKK attacks. Keeping thousands of people under curfew for days, depriving them of basic resources or putting tanks on the streets will not help the country’s fight against terrorism but will only give the PKK a tool of propaganda.

If the AKP’s solution for the problem is not the “annihilation of all Kurds,” it is time to end the “fight fire with fire” strategy and ensure the security of all the country’s citizens.