Solidarity with daily Özgür Gündem and its detained or harassed journalists

Daily Özgür Gündem, which has been shut down by court order, has been released as a special four-page edition carrying the headline “We will not give in”. The daily, published in solidarity, appeared in newsstands as a special edition of Atılım newspaper. On the back page, it was captioned “You cannot silence us” with photos of the daily’s workers.

In the editorial article issued on the first page, following phrases were used: “We call all of our friends to repel this attack directed at our daily, and we call our people to look out for their newspaper and free press. We are repeating our unhesitant firm stance, which we have maintained against the February 28 coup that the Islamist media had remained silent about. We persist to stand against the [July 15] coup attempt. We will stand against AKP (Justice and Development Party) coup as well. We’ve never remained silent, you will not be able to silence us.”

Info-Turk is entirely in solidarity with Özgür Gündem, its detained or harassed journalists.

We condemn Erdogan’s islamo-fascist power that attempts to silence the free voice of the Kurdish people as well as so-called journalists in the service of this shameful power who do not come against this violation of press freedom.

We also condemn the attitude of the social democrat politicians who did not hesitate, by rendering visit to Erdogan’s shameful Presidential Palace and participating in his Nürnberg-type mass rally, to give support in his attempt to establish one-man islamo-fascist dictatorship after the doubtful July 15 coup. 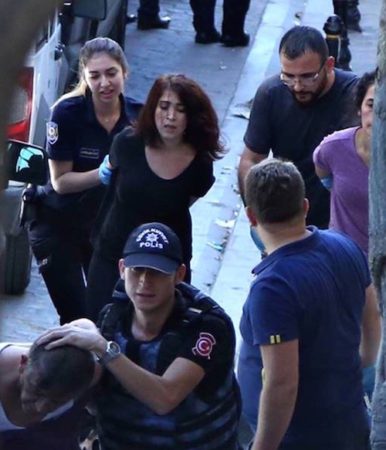 
Özgur Gündem is the latest opposition newspaper in Turkey to be forcibly shut down following the crackdown on media in the wake of a failed coup.

A court in Istanbul ordered the closure of the pro-Kurdish newspaper on Tuesday for spreading alleged propaganda on behalf of the outlawed Kurdistan Workers Party (PKK).

The move comes as Can Dündar, editor in chief of another opposition newspaper Cumhuriyet, resigned from his position, claiming he would live abroad after having been condemned to 5 years in prison for allegedly divulging state secrets.

The European and International Federations of Journalists (EFJ-IFJ) has called for the closure of the paper to be reversed and backed Turkish journalists’ unions calls for an end to the crackdown on independent and opposition media.

EFJ President Mogens Blicher Bjerregård said : “The use of violence against journalists and media workers are unacceptable anytime, anywher and what just happened at Özgür Gündem, the historical Kurdish daily in Turkey, is unacceptable. Apparently, the authorities are using the post-coup state of emergency situation to attack all critical voices”.

IFJ President Philippe Leruth said: “We are witnessing the strangulation of free and independent media in Turkey. Journalists are being sacked and arrested, media closed and dissenting voices silenced. The world must wake up and demand the rights of Turkey’s journalists and media are upheld”.

Özgur Gundem, whose print version has a daily circulation of around 7,500, has faced dozens of investigations, fines and the arrest of correspondents since 2014.

It has been repeatedly closed down in the past. More recently, the paper started a campaign on May 3, World Press Freedom Day, called “editors-in-chief on duty” in which guest editors temporarily took charge of the paper in an attempt to defend press freedom and highlight attacks on the paper and its journalists. However, an Istanbul court ordered the arrest of three of the campaigners, Şebnem Korur Fincancı, Erol Önderoğlu and Ali Nesin on charges of “making terror propaganda” after they served as guest editors. After more than 10 days in jail, they have been released pending trial.

Following the closure of Özgür Gündem, the authorities violently raided today the house of Ragip Zarakolu, a journalist, writer and editor known for his publishing houses on minority rights in Turkey. The writer was not home but his books about Armenian, Pontus and Assyrian genocides have been seized by the authorities. Houses of journalists Eren Keskin and Filiz Koçali have also been raided by the police for similar purpose.

Turkey has closed more than 130 media outlets and jailed more than 50 journalists since a state of emergency was declared in the wake of last month’s (15 July) failed military coup.

Police launched a raid into the apartment of Sinan Zarakolu, the son of publisher, columnist and journalist Ragıp Zarakolu, who was registered at this address.

It has been reported that Ragıp Zarakolu was not at his son’s apartment, and that the police have broken in the apartment and seized his books.

Zarakolu has announced the incident on the social media website Facebook as; “I protest against Özgür Gündem daily being shut down and the barbarous police raid into my son’s apartment”.

The police had also raided the daily’s former Editor-in-Chief Eren Keskin’s house. Filiz Koçali, like Eren Keskin, was not at home at the time of the raid.

Ragıp Zarakolu was born in 1948 on Heybeliada, the second largest of the Prince Islands, in İstanbul. He started publishing with his wife, Ayşe Nur Zarakolu in 1977. He never abandoned his struggle for “popularizing respect for different ideas and cultures in Turkey” despite pressures, his books being seized or destroyed, heavy fines and being sent to prison. Zarakolu serving as the President of Publishers’ Union of Turkey Committee of Free Publishing has worked on Kurdish question and condition of minorities in Turkey.

Zarakolu lastly was arrested together with his son Deniz Zarakolu within the scope of Group of Communities in Kurdistan (KCK) case* in 2011. He remained in prison until April 2012.

After his release, on December 19, 2012 in Brussels, Ragip Zarakolu talked on the situation of press freedom in Turkey at a conference organized by European Journalists’ Federation (EFJ) and Info-Türk Foundation.

Same evening, during a ceremony with the participation of diasporas representatives, Zarakolu was given “Freedom Award” by Info-Türk Foundation.

After his release in 2012, during a conference on the violation of press freedom in Turkey,

Erdoğan whose house was searched was taken into custody. It is yet to be known (12 p.m.) at which police station Erdoğan is being kept.

Born in Istanbul, she graduated from Robert College in 1983 and the Computer Engineering Department of Boğaziçi University in 1988. She worked at CERN as a particle physicist from 1991 to 1993 and received an MSc in physics from Boğaziçi University as a result of her research there. She began research for a PhD in physics in Rio de Janeiro before returning to Turkey to become a full-time writer in 1996. Aslı Erdoğan was detained on 17 August 2016 during the police raid on pro-Kurdish daily, Özgür Gündem for being a member of the Advisory Board of the newspaper.

Her first story The Final Farewell Note won third prize in the 1990 Yunus Nadi Writing Competition. Her first novel, Kabuk Adam (Crust Man), was published in 1994 and was followed by, Mucizevi Mandarin (Miraculous Mandarin) a series of interconnected short stories in 1996. Her short story Wooden Birds received first prize from Deutsche Welle radio in a 1997 competition and her second novel, Kirmizi Pelerinli Kent (The City in Crimson Cloak), received numerous accolades abroad and has been published in English Language translation.

She was the Turkish representative of International PEN’s Writers in Prison Committee from 1998 to 2000. She also wrote a column entitled The Others for the Turkish newspaper Radikal, the articles from which were later collected and published as the book Bir Yolculuk Ne Zaman Biter (When a Journey Ends) and featured in the 2004 edition of M.E.E.T.’s journal.

She is widely traveled and has an interest in anthropology and Native American culture.

From December 2011 to May 2012, at the invitation of the Literaturhaus Zurich and the PWG Foundation, Erdoğan was Zurich’s “writer in residence”.

Attorney Keskin is a columnist at the Özgür Gündem and founder of the Legal Aid Bureau Against Sexual Harassment and Rape in Custody.

She served as Co Editor-in-Chief at the Özgür Gündem. She carried out the duties of Human Rights Association (İHD) Deputy Chair and Istanbul Branch Director.

She was granted many awards as a rights defender: Aachen Peace Prize (2004), Theodor Haecker Political Courage and Honesty Prize (2005), and a symbol figure in the fight against impunity on November 23 International Day to End Impunity (2013).

She writes at the Özgür Gündem daily. She was among the candidates for the Peoples’ Democratic Party (HDP) Aydın MP position in the 25th term.

Koçali was born in İstanbul on January 22, 1958. She graduated from Çamlıca Kız Lisesi (Çamlıca Girls School) and İstanbul Academy of Economics and Commercial Sciences, Press College.

She worked at the magazines of Kadınca, Kim and at bianet. She wrote articles in Söz, Yeniden Özgür Gündem, and Sosyalist Demokrat newspapers. She was a board member at Sosyalist Feminist Kaktüs magazine. She was among the founders of Gazete/Pazartesi magazine, exclusive to women.

She entered political life by joining the student movement in 1976. In order to participate in the rising laborer movement at that time she worked as a laborer at Altın Yıldız and Arıkol factories.

She took place in the human rights movement after the September 12 coup. She was one of those who started sit-in protests of the Saturday Mothers/People against the disappeared in custody.