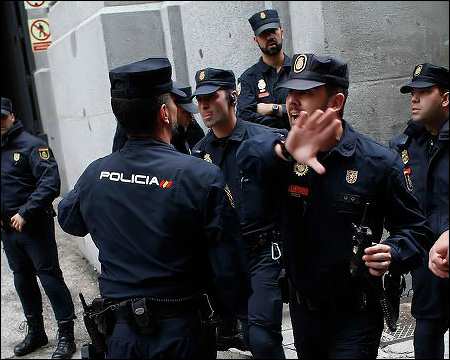 MADRID,— Spanish police arrested nine people on Wednesday accused of belonging to and collaborating with a criminal and terrorist organisation due to connections with the Turkey-based Kurdistan Workers Party (PKK), the Interior Ministry said in a statement.

Of those arrested, eight were from Spain and one from Turkey, according to the statement.

The operation, which remains open, also searched 11 houses during dawn raids in Madrid, Valencia and Bilbao, the ministry said.

“Those arrested, in collaboration with other residents in other European countries, supplied the necessary infrastructure to send people to join the ranks of the People’s Protection Units (YPG) or the armed wing of the organisation,” the ministry said.

Including the arrests on Wednesday, Spain has detained 19 people accused of belonging to the PKK since 2013, according to the ministry.

The PKK took up arms in 1984 against the Turkish state, which still denies the constitutional existence of Kurds, to push for greater autonomy for the Kurdish minority who make up around 22.5 million of the country’s 78-million population, in Turkish Kurdistan. The conflict has left tens of thousands dead.