Stand up for Dunya

The events in Syria, the abhorrent actions of Boko Haram, the increasing violence in Ukraine are just a few headlines that have summoned our attention of late. But now, Kurds in Southern Kurdistan under the protection of the Kurdistan Regional Government (KRG) have been shocked by the headline of the brutal murder of a 15-year-old girl allegedly at the hands of her 45-year-old husband in the governorate of Dohuk. The images that have circulated albeit very irresponsibly by the media have outraged and stunned the public. The sheer force of violence perpetrated against this young girl denounces humanity. 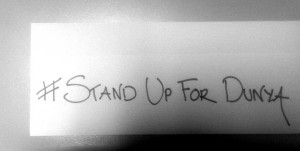 Whilst violence and indeed the issue of child marriage are nothing new in the Kurdistan Region or the rest of the world (the United Nations Population Fund (UNFPA) claims that between 2011 and 2020, more than 140 million girls will become child brides), this young girl’s tragic death has surfaced a number of outstanding cultural norms that continue the cycle of violence against women.

Her name was Dunya and at 15 years old, her parents compromised her innocence and youth by wedding her to a man 30 years her senior. 45-year-old Sleman Ziad Younis already had a wife and six children all older than his new bride. The photo of Dunya in a wedding gown with her hair and makeup done, hide nothing of the hollowness in her eyes. The husband, who is currently on the run with an arrest warrant out for him is the prime suspect. The details over why he would have butchered her to death are still unclear but what is unambiguous is that this young girl was wed at 15 years to a 45-year-old man. This is contrary to KRG law (Act No. 15 of 2008, amendment to Law No. 188 of 1959) which states the age of consent for marriage is 18 years and that the marriage has to be presided over by a judge. Media reports allege that a Mulla, who is yet to be named, performed the religious wedding ceremony in a mosque and that the parents acquired $3,500 in return for their daughter.

The KRG has taken progressive steps to restore its tarnished image when it comes to women’s rights by passing laws, notably Law No.8, setting up specific domestic violence courts, making illegal Female Genital Mutilation and killings under the banner of so-called honor. In addition, they are actively promoting initiatives such as the annual 16 day campaign of eliminating violence against women in November. These measures are of course a good step but unfortunately the recurring brutality of this nature indicates that this is simply not enough. What needs to be addressed is society’s acceptance of the traditional and chauvinist roles that are continually forced upon women today, not just by men but women too, who unfortunately are often complicit in the crimes.

Dunya’s parents knowingly wed her to a 45-year-old man and received money for it. The unnamed Mulla sanctified the marriage of a child to a man 30 years her senior knowing that he was acting illegally. A 45-year-old man consciously made the decision to seek a 15-year-old as his wife and then physically abused her for a year according to her mother’s testimony before murdering her and the media recklessly and negligently disseminated images of her slaughtered body.

The laws for combating violence against women exist but implementation is not strong enough nor is the will of the people, for even now, many see such incidents as family matters that do not warrant interference from the state. But this child was not extended protection by her family or her society; therefore, the state must activate its authority and do so strongly.

When religious figures in the name of their faiths allow injustices and act in defiance of laws, the law needs to be stern and the government and influential community leaders need to take a stronger stance. If her parents and the Mulla had refused to make Dunya a child bride then maybe she would still be alive. The Ministry of Religious Affairs needs to condemn the actions of such religious figures and parents and be at the forefront of a campaign to ensure that the Kurdistan Region does not have to bury anymore young girls who have been forced into marriages blessed by a religious figure otherwise they too like Dunya’s parents, the Mulla, the husband and society, have blood on their hands. Right now, the public is outraged and holding candlelight vigils for this young girl but how long before this all blows over and their outrage is reignited for another girl?

Published by Alliance for Kurdish Rights