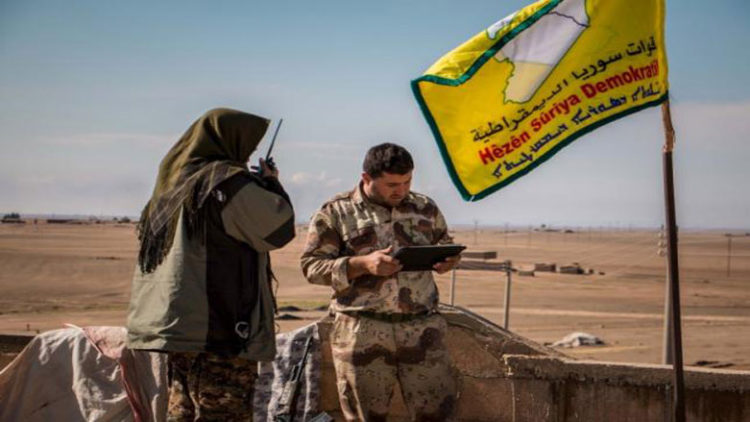 Rebel fighters form the Democratic Forces of Syria, use a walkie talkie and a tablet near the al-Hawl area where fighting between them and Islamic State fighters are taking place in south-eastern city of Hasaka, Syria November 10, 2015. REUTERS/RODI SAID

Colonel Talal Silo, spokesman for the SDF, told K24 on Tuesday, “Our units liberated about six villages south of Ain Issa, but our advancement towards Raqqa is still in the beginning for it is not a fully organized military campaign like the first one of Hawl and the second one of southern Kobani where we liberated Tishrin Dam.”

Colonel Silo added that dozens from both sides were killed in clashes during the past few days and that the liberated villages, including Abu Sahim and Alhabsawy south to Ain Issa, are about fifty kilometers north to Raqqa, the de facto capital of IS.

Regarding the target areas for SDF, Lewand Rojava, a senior officer of SDF, told K24 on Tuesday, “Our target is not only the Kurdish areas in Syria but rather we are fighting to liberate all areas under the control of terrorists and to establish a new democratic Syria.”

Lewand added that SDF forces’ advancement south of Ain Issa was a response to the terrorist forces that carried out an offensive on Ain Issa’s southern villages. “The clashes are ongoing now, and we cannot give accurate numbers and information on the liberated areas and casualties on both sides,” he explained.

The Syrian Kurdish forces of People Protection Units (YPG) talked about the IS offensive on Ain Issa in a statement on their official website on January 1, 2016.

“The terrorists’ objective was Ain Issa, in the time of the first two raids [of Hawl and Tishrin Dam], the terrorist group attempted to advance from two sides on the town [of Ain Issa]. During those attacks, the enemy forces [of IS] used heavy weapons and vehicle-borne improvised explosive devices along with a number of armored vehicles. Responding to the desperate efforts of the terrorists, the Defense Units managed to target and destroy a VBIED and a munition-laden truck within enemy lines,” the statement read.

Founded in October 2015, the SDF seek to expel IS from Raqqa and other areas in Syria. These forces consider themselves a unified national military force for all Syrians and consists of Kurds, Arabs, Assyrian Christians, and others. SDF aims at building a self-governing, inclusive and democratic Syria.