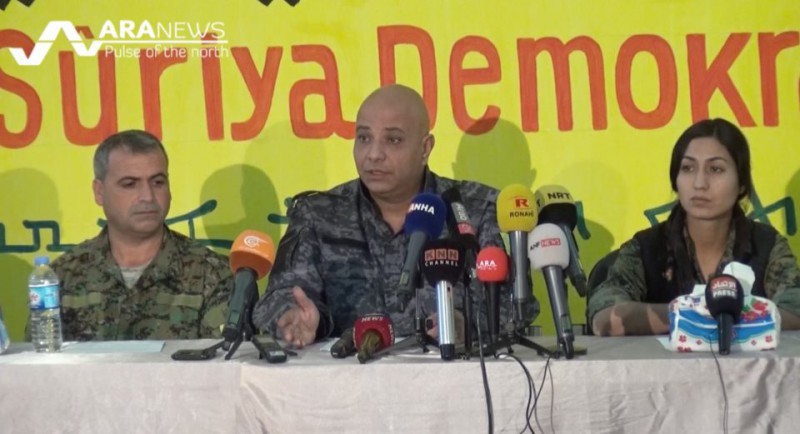 Leadership of the Syrian Democratic Forces speaking to a press conference in Hasakah. Photo: ARA News

Tel Abyad – The Syrian Democratic Forces (SDF) on Sunday announced the launch of an operation to liberate Raqqa from Islamic State’s (ISIS) militants.

“On this occasion, we assure the democratic forces in the world, our great Syrian people and peoples of the region that this operation will be proceeded strictly till its goal is met in isolating the capital of world terror, then bringing it down. We will be victorious in this decisive battle like we overcame in Kobane, Tel Abyad, al-Hasakah, al-Hawl, al-Shaddadi and Manbij,” the SDF said.

The forces also called for a regional and international support in the battle for Raqqa.

Furthermore, the SDF demanded civilians of being cautious regarding a possible use of human shields by ISIS.

“We also call on our people in Raqqa to stay away from ISIS headquarters, which will be direct targets for the SDF and the coalition. We appeal to the civilians to head to secure locations, and to support our operation, the Battle for Raqqa.”

In the meantime, the US Defence Secretary Ash Carter welcomed the operation.

“I welcome today’s announcement by the SDF that the operation to free Raqqa from ISIS’ barbaric grip has begun. The effort to isolate, and ultimately liberate, Raqqa marks the next step in our coalition campaign plan,” US Defense Ash Carter said in a statement on Sunday evening.

“As in Mosul, the fight will not be easy and there is hard work ahead, but it is necessary to end the fiction of ISIL’s caliphate and disrupt the group’s ability to carry out terror attacks against the United States, our allies and our partners. The international coalition will continue to do what we can to enable local forces in both Iraq and Syria to deliver ISIL the lasting defeat it deserves,” he said.

Earlier the Pentagon, has withdrawn a controversial request to provide direct arms shipments to the YPG, the Washington Post reported.

According to US officials, consideration of the weapons was deferred because initial plans to encircle the city by taking control of surrounding villages and access routes would not require additional weaponry and because conflicts with Turkey remain unresolved.

Nicholas Heras, a Washington-based Middle East researcher at the Centre for a New American Security, told ARA News that the People’s Protection Forces (YPG), the Kurdish component will most likely not receive weapons.

The US-led Coalition has likely promised to replenish the SDF Arab units with arms and ammunition, but stopped short of making that guarantee to the Kurdish YPG units.

“I don’t think the outcome of the battle to retake Raqqa hinges on whether the YPG receives weapons directly or wearing its Syrian Democratic Forces hat,” Amberin Zaman, Public Policy Scholar at the Woodrow Wilson International Center for Scholars, told ARA News.

“What matters here is the political aspect of any arms transfer. Will it be packaged as initially envisaged under legislation that covers assistance to foreign militias fighting on the side of the US. Had that gone through it would have put an institutional stamp on the US YPG relationship which is what the YPG wants more than anything,” she said.

“They want to carry this tactical alliance with the US against ISIS to a political and strategic level and that is why they are willing to take part in the Raqqa campaign even though it doesn’t serve their immediate interests which is to link the cantons but which the US for now at least is opposing,” she stated.

The SDF said Raqqa city will be liberated with the aid of its people be it Kurds, Arabs, or Turkmen.