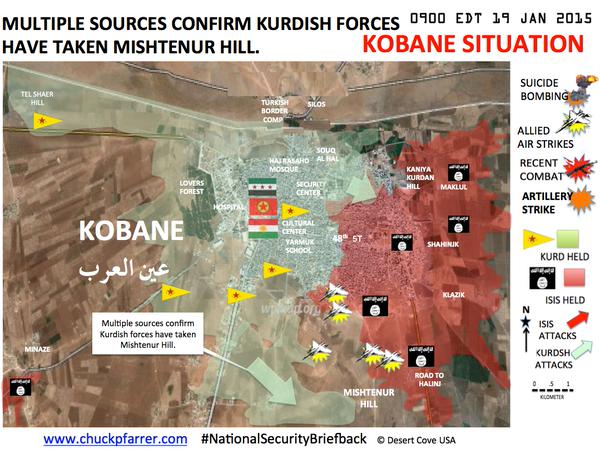 KOBANI, Syrian Kurdistan,— Kurdish fighters battling the Islamic State jihadist group in Koban in Syrian Kurdistan have captured a strategic hilltop, giving them line of fire over the town, a monitor said Monday.

“The military operation led to the deaths of at least 11 Islamic State fighters, and the seizure of large quantities of weapons and ammunition,” the Observatory said.

The Kurdish Peoples’ Defence Units (YPG) Press Office has said Mistenur Hill has been cleansed of IS militants and liberated in a written statement regarding the ongoing clashes in Kobani in their 126th day. YPG reported that 40 IS militants were killed in clashes Sunday night while large amounts of ammunition was also seized from the IS groups ANF reported.

“Having taken under their control 70 percent of the town, YPG/YPJ forces launched an extensive operation last night to liberate Mistenur Hill” said the YPG, adding that the operation was backed by coalition aircraft. YPG reported that fierce and intense clashes took place between the gangs and YPG/YPJ forces in the operation.

Observatory director Rami Abdel Rahman said the advance was a key strategic victory for the YPG, putting IS resupply lines to Aleppo in the west and Raqa in the east within their line of fire.

IS has been battling to capture Kobani, on the Syrian-Turkish border, since mid-September, and at one point seemed poised to overrun the Kurdish town.

But Kurdish fighters backed by massive air raids by the US-led coalition against IS have gradually pushed back the jihadists, who now hold around 15 percent of the town.