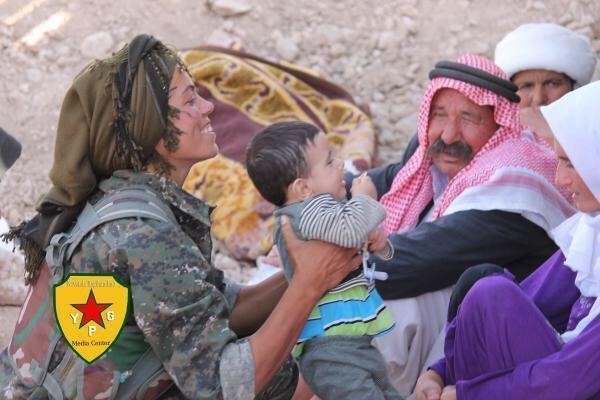 MALIKIYA, Syria – In a dusty camp here, Iraqi refugees have new heroes: Syrian Kurdish fighters who battled militants to carve out an escape route for tens of thousands trapped on a mountaintop.

While the U.S. and Iraqi militaries struggle to aid the starving members of Iraq’s Yazidi minority with supply drops from the air, the Syrian Kurds took it on themselves to rescue them. The move underlined how they — like Iraqi Kurds — are using the region’s conflicts to establish their own rule.

For the past few days, fighters have been rescuing Yazidis from the mountain, transporting them into Syrian territory to give them first aid, food and water, and returning some to Iraq via a pontoon bridge.

The Yazidis, a Kurdish-speaking minority who follow an ancient Mesopotamian faith, started to flee to the Sinjar mountain chain on Aug. 2, when militants from the extremist Islamic State group took over their nearby villages. The militants see them as heretics worthy of death.

“The (Kurdish fighters) opened a path for us. If they had not, we would still be stranded on the mountain,” said Ismail Rashu, 22, in the Newroz camp in the Syrian Kurdish town of Malikiya some 20 miles from the Iraqi border. Families had filled the battered, dusty tents here and new arrivals sat in the shade of rocks, sleeping on blue plastic sheets. Camp officials estimated that at least 2,000 families sought shelter there on Sunday evening.

Nearby, an exhausted woman rocked a baby to sleep. Another sobbed that she abandoned her elderly uncle in their village of Zouraba; he was too weak to walk, too heavy to carry.

Many said they hadn’t eaten for days on the mountain; their lips were cracked from dehydration and heat, their feet swollen and blackened from walking. Some elderly, disabled and young children were left behind. Others were still walking to where Syrian Kurds were rescuing them, they said.

“We are thankful, from our heads to the sky, to the last day on earth,” said Naji Hassan, a Yazidi at the Tigris river border crossing, where thousands of rescued Yazidis were heading back into Iraq on Sunday.

The U.N. estimated around 50,000 Yazidis fled to the mountain. But by Sunday, Kurdish officials said at least 45,000 had crossed through the safe passage, leaving thousands more behind and suggesting the number of stranded was higher.

Syrian Kurds have carved out effective self-rule in the northeastern corner of Syria where they make up the majority. But while members of the ethnic group in both Iraq and Syria pursue their destiny, the two communities are divided by political splits.

Iraq’s Kurds, who have managed a self-rule territory for over two decades, are dominated by factions that have built up strong ties with neighboring Turkey. Syria’s Kurds, however, are closer to longtime Turkish Kurdish rebels and until the 2011 uprising against President Bashar Assad were firmly under his control.

Syrian Kurdish officials said soon after Yazidis fled their villages, they began fighting to create a safe passage. They clashed with Islamic State fighters upon entering Iraq, losing at least 9 fighters, but by Aug. 7 had secured a safe valley passage, cramming Yazidis into jeeps, trucks and cars to bring them some 25 miles away. Some of the ill were even rushed to hospital.

“We answered their cries for help. They were in danger and we opened a safe passage for them into safety,” said military official Omar Ali. “We saw that we had to help them and protect them; they are Kurds and part of our nation.”

In saving Yazidis, Syrian Kurds were also demonstrating their own ambitions for independence as Syria’s civil war rages on.

They announced their autonomous area of Rojava in January, and rule several far northeastern Kurdish areas of Syria. Government forces stationed in the area were redeployed over two years ago to battle rebels seeking Assad’s overthrow, Syrian Kurdish officials said.

But in entering Iraq, the Syrian fighters are also challenging their Iraqi Kurdish rivals. They say they entered after the Iraqi Kurdish fighting force, called the peshmerga, fled Yazidi villages after short battles with Islamic militants. The peshmerga say they were outgunned by the militants.

The U.S. has since assisted the peshmerga fighters with airstrikes, and on Tuesday, a U.S. drone strike destroyed a militant mortar position threatening Kurdish forces defending refugees near the Syrian border. A day earlier, the U.S. said it would provide more weapons directly to Kurdish forces, but it was unclear what materiel was under consideration. Later Tuesday, the Iraqi military said a helicopter delivering aid to the displaced had crashed.

For now, with the peshmerga gone and state aid ineffective, the Yazidis who survived the mountaintop ordeal were counting on the Syrian Kurdish fighters. Covered in dust among crowds at the Tigris crossing, Hassan said without the fighters all would have been lost.

“Were it not for them, no Yazidi would be saved,” he said