Published by The Independent 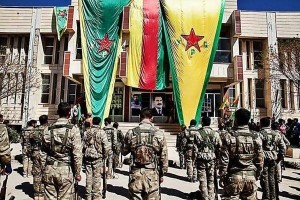 Syrian Kurdish leaders plan to capture the last border crossing point between Syria and Turkey held by Isis, making it impossible for jihadist volunteers from Europe and elsewhere to reach Isis-held territories.

The seizure of the frontier town of Jarabulus on the Euphrates River is certain to anger Turkey, which is already alarmed by the rise of a Syrian-Kurdish state-let in northern Syria, aided by US air strikes and fielding strong military forces.

The loss of Jarabulus would isolate Isis, bringing to an end its ability to bring in thousands of fanatical Islamic fighters who have been crossing from Turkey into Syria without significant hindrance over the last four years. Isis has frequently used these foreign volunteers as suicide bombers driving vehicles packed with explosives as an essential element in its military strategy.

“We have plans to liberate Jarabulus,” said Idris Nassan, the vice-minister for foreign affairs of Kobani, the Kurdish enclave where the YPG (People’s Protection Units) defeated Isis, told The Independent. He pointed out that “Jarabulus is the last Daesh [Isis] border crossing with Turkey” since the YPG seized its only other border crossing point at Tal Abyad, east of Kobani, in June.

Mr Nassan quoted the overall commander of the YPG, General Sipan Hamo, as saying the attack on Jarabulus would “be in coordination with the US because we are part of the international coalition. They fight in coordination with us”. This may present the US with a dilemma because in July it did a deal with Turkey whereby it uses Incirlik airbase in Turkey for air strikes against Isis. But the Turks want to stop the YPG advancing west of the Euphrates. The Syrian Kurds already control half of Turkey’s 550 mile-long border with Syria.

The Syrian Kurds are confident they can defeat Isis, which dominates the rest of eastern Syria, after they withstood a four-and-half-month siege of Kobani by Isis that ended in January. The success of the YPG came because its fighters fought ferociously against the Islamic militants and, since October last year, its commanders have been able to call in US air strikes.

It was the support of some 700 US air strikes that helped the YPG win the battle for Kobani, though it reduced this small city to a seascape of shattered concrete where buildings have been pounded into rubble by the force of the bomb blasts. In between the ruins there are individual shops and houses that survived intact, but 70 per cent of the city is destroyed and construction workers are only slowly making an impact.

Victory at Kobani boosted the self-confidence of the YPG, which is the only ground force in Syria or Iraq that has regularly defeated Isis. After the end of the siege, the YPG won back the rest of Kobani canton, including 380 villages. And in June it captured the border town of Tal-Abyad which Isis had held for more than two years. This linked up the two main Kurdish cantons. Its capture was also important because it is only 100km (62 miles) north of Raqqa, the Isis de-facto capital in Syria.

Important though Tal Abyad was to Isis, it did not commit many fighters to holding the town, having apparently decided that it was indefensible. YPG forces were advancing from west and east towards the road linking it to Raqqa. A 21-year-old YPG fighter called Misro Munzer, hit in the knee by a machine gun bullet in a later battle and interviewed in a military hospital in Kobani, said that he had fought at Tal Abyad where “Daesh [Isis] did not fight hard”.

He explained that the more battle-hardened Isis men had retreated leaving only a remnant of 25 men without much combat experience who were demoralised and confused by US air strikes.

There is no doubt that YPG light infantry backed by US air power are highly effective and Isis cannot hold fixed positions against a combination of the two. Isis suffers heavy casualties when it tries to do so. But this does not mean that it cannot hit back as became evident on the drive east from Kobani, on what was meant to be an entirely safe road going to al-Qomishli, the capital of the largest Syrian Kurdish enclave.

There were some early signs that the road was not quite as secure as we had been told. As we entered an Arab village called Qayyil, 15km west of Tal Abyad, we were stopped by a large detachment of YPG troops who said they were conducting a search. One of them told us that “we have information that four or five Daesh [Isis] fighters have penetrated the village and we are looking for them”. Other YPG fighters were guarding crossroads and entry points into Qayyil.

We drove on to Tal Abyad, a town which locals said had once had a population that was half-Arab and half-Kurdish, Turkoman and Armenian. Three months ago it had been in the hands of Isis. We wanted to look at the closed border crossing with Turkey and the police agreed to take us there.

But, as we followed a police vehicle down the street, a Kurdish woman in a black robe rushed out of a house shouting that she needed the police and our escort stopped to help her. She said that she and her daughters had been sitting in the courtyard of her house when “a man dressed in black with a beard who looked like Daesh had climbed over a wall and run past us”. The police said that there were still Isis hiding in the many abandoned houses in Tal Abyad.

These two incidents were not too surprising since Tal Abyad and nearby villages had only recently been captured by the Kurds. But the next town on our route, Ras al-Ayn, had been held by the YPG for two years. But, soon after we had entered, there were two bangs that sounded like gunshots close together, but then we saw a cloud of dense smoke rising from a checkpoint just ahead. Kurdish security men blocked the road in front of us within a couple minutes, turning back vehicles and news soon spread that there had been a suicide car bomb which killed at least five people.

It also emerged that there had been a suicide bombing just behind us at a checkpoint at the entrance to Ras al-Ayn that we had just driven through. A man on a motorbike had blown himself up but had failed to kill or injure anybody.

These incidents are all probably an attempt by Isis to show that it is still to be feared despite its recent defeats. In June it sent a detachment into Kobani disguised in Kurdish and Free Syrian Army uniforms that killed over 200 men women and children.

Isis has in the past launched diversionary raids to keep its enemy’s troops dispersed before the main assault on a single target. But if the YPG tries to capture Jarabulus and cut Isis’s last exit to the outside world, the Islamic militants will probably have to fight.