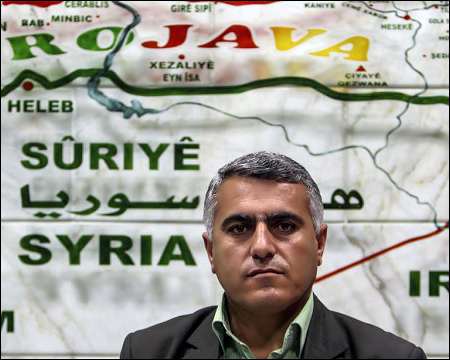 AMUDA, Syrian Kurdistan,— The Kurdish-led administration in Syrian Kurdistan (Rojava), northwest Syria, says a new land corridor to the government-controlled west marks an economic breakthrough for their autonomous Kurdish region that has been under “siege” by hostile parties.

Abdul Karim Saroukhan, head of the Kurdish-led administration, also warned that Turkey risked igniting a new war in the north, where Ankara and its Syrian rebel allies have vowed to march on a city held by Kurdish-allied groups.

Syrian Kurdish groups and their allies are one of the main players in the conflict for northern Syria. Their growing influence has led to direct military intervention by Turkey, which sees them as a threat to its national security.

Their relations with Syria’s central government, despite historic enmity, are more nuanced. They have steered clear of confrontation in the six-year-old war and their critics say they have occasionally cooperated against common enemies, notably the rebels fighting President Bashar al-Assad. The YPG denies this.

The war in northern Syria has accelerated in recent weeks with the Russian-backed Syrian military launching an offensive against Islamic State in the same area. This week, the army reached territory that falls under the sway of the Kurdish groups for the first time since early in the conflict.

“The opening of a corridor between us and Aleppo will have a great positive impact,” said Saroukhan, the head of the Kurdish-led administration in the northeast. “It is like an artery that will feed part of the Syrian body,” he told Reuters in an interview.

It holds out the prospect of a big boost to a region that is home to rich agricultural areas and oil fields but which has little in the way of its own manufacturing base.

Syria’s Kurdish region is bordered to the north by Turkey and to the east by the Kurdish government of northern Iraq. Both are hostile to the YPG, the main Syrian Kurdish militia. Turkey views the YPG as an extension of the Kurdistan Workers’ Party (PKK), which is waging an insurgency in Turkey.

Saroukhan said recent Syrian government advances in rural areas east of Aleppo had led to tensions with the YPG in some areas. Asked if there were contacts with Damascus over trade, he said there were none and such talk was premature.

But he saw the prospect of private commerce with Aleppo, Homs and other government-held cities.

“Our expectations are that we can reach understandings with everyone in the other provinces,” said Saroukhan, head of the biggest of three Kurdish administrations in northern Syria.

The people of northeastern Syria – Kurds, Arabs and other groups – were particularly in need of medicines and construction materials to rebuild from the YPG’s conflict with Islamic State.

Northeastern Syria could in turn sell surplus agricultural output to other parts of the country, though Saroukhan said poor rainfall meant there would be no wheat for sale this season.

He also said surplus oil output from the region was looking for “exits, ways, crossings” to other parts of Syria, describing the area as the “oil well that supplied Syria for 65 years” and that “we can cooperate” in this regard.

He added that while the oil was under YPG protection, it was a national resource whose status should be determined in a final settlement to the Syria crisis.

The YPG and allied militias are the main partner for the United States in the war it is waging against Islamic State in Syria, though Washington does not support the Kurdish groups’ political project.

The main Syrian Kurdish party, the PYD, and its allies are seeking to deepen their autonomy in northern Syria through the establishment of a new system of government. They say they do not seek an independent country.

Saroukhan said Turkey was afraid of the “democratic model” established in northern Syria and was trying to block it. He said that while the Kurdish-led administration wanted to deal with Turkey as a neighbor, Ankara was making threats and occupying Syrian land.

“If Turkey continues in this way, in this vein, it will be the start of a new war in Syria, in the north,” he said.

Turkey has said the next target of its campaign in northern Syria will the city of Manbij, which was captured from Islamic State last year by a U.S.-backed alliance of militias that includes the YPG.

Saroukhan said the alliance known as the Syrian Democratic Forces was ready to send reinforcements there if necessary. “They will not allow the entry of any other forces to this city,” he said.

U.S regards the Kurdish PYD and its powerful military wing YPG of Syrian Kurdistan as key ally against Islamic State and the most effective fighting force against IS in Syria and has provided them with arms, air support as well as the military advisers. The Kurdish militia has seized swathes of Syria from IS.