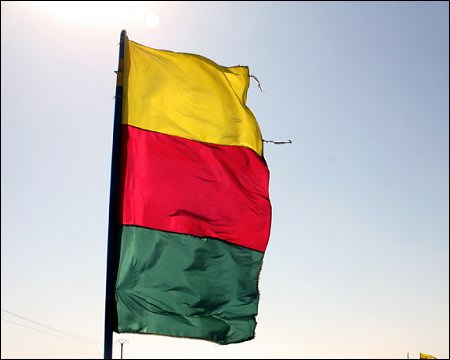 MOSCOW,— Wednesday is set to see an inauguration ceremony of the first European office of Syrian Kurdistan, which will be located in Moscow. The ceremony is to be attended by Russian foreign ministry officials as well as representatives from several other countries, according to Abdulsalam Ali, the Syrian Kurdish envoy in Moscow. This will be a representative office of an NGO that has no functions of an embassy.

Russia’s Foreign Ministry earlier told TASS the opening of the Kurds’ representative office is not envisaged by the Russian legislation. Their interests are advocated by the diplomats from the embassies of Syria and Iraq.

“The representative office will advocate the interests of Kurds who live in Russia and Syria, but many of them are not Syrian citizens,” the chairman of the Council of the Federal National-Cultural Kurdish Autonomy, Farkhat Patiev, said in an interview with TASS last week.

Some 250,000 Kurds, the largest ethnic minority in Syria, currently live in Russia.

Syria’s Ambassador to Russia told TASS commenting on the opening of the office that Syrian Kurds are an important part of society in Syria, but Damascus does not divide the Syrian people upon an ethnic principle. “We learnt about that from the media and some other sources. I do not know anything about its tasks or the number of employees,” the Syrian diplomat said.

Meanwhile Russia takes a stand in favor of the Kurds’ representative participation in the intra-Syrian talks, the Russian Foreign Ministry said on Tuesday following meeting between presidential envoy for the Middle East and Africa, Deputy Foreign Minister Mikhail Bogdanov and Secretary General of the Kurdish Democratic Progressive Party in Syria Abdelhamid Darwish.

“Particular attention during the meeting was paid to the development of the situation in and around Syria with a focus on the task of launching sustainable UN-brokered negotiations between the Syrian government and the oppositions in accordance with Resolution 2254 of the UN Security Council,” the Russian Foreign Ministry said.

“Against this background, the two sides pointed to the need of the Kurds’ representative participation in the intra-Syrian negotiation process.”

The powerful Kurdish People’s Protection Units (YPG) of Syrian Kurdistan (northern Syria), which the U.S. and Russia consider an ally in the fight against IS, is the most effective group fighting IS in Syria, as the Kurdish militia has seized swathes of Syria from IS.

Speaking of the Syrian Kurds in November 2015, U.S. policy advisor, and former United States diplomat Peter Galbraith notes that in his trip to Syrian Kurdistan, he noticed that “they have gone from being rebels in charge of an area to having many more attributes of a government.”