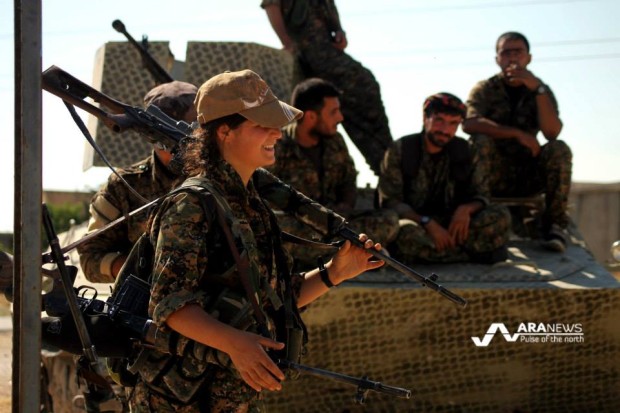 Syrian Kurds are ready to participate in the looming battle for Raqqa City on the condition that the US-led coalition recognises their federal project in Rojava and directly arms the People’s Protection Units (YPG), officials said.

The US-led coalition is planning a fresh offensive aimed at liberating Raqqa –the Islamic State’s (ISIS) de facto capital in Syria. This plan is hampered by a downswing in relations between the Kurdish-led Syrian Democratic Forces (SDF) and the US. The immediate cause of which is Washington’s support for Turkey’s intervention.

Hanifa Hussein, a senior Kurdish official and member of the Democratic Society Movement (TEV-DEM), said that the Kurds are ready to take part in the proposed anti-ISIS operation.

“But first we need to make sure that our federal project would be accepted by Washington and coalition members, the YPG forces would receive arms directly, and the Kurds would be officially invited to the Geneva peace talks,” Hanifa told reporters on Wednesday.

Jordan Matson, an American volunteer with the Kurdish YPG, told ARA News that in bending to Erdogan’s demands the, Obama administration had effectively stopped the war on ISIS. Jordan reasoned that a lull was imminent since the Kurdish-led SDF would not commit to a Raqqa operation without cutting off ISIS supply lines between Syria and Turkey.

“By stalling, you have saved Raqqa for possibly years to come as no one else will take it,” he said.

In order to garner Kurdish support, the US administration is now thinking of directly arming the Kurdish-led SDF, over Turkey’s ardent opposition. Turkey is currently lobbying to undermine support for the Kurds abroad and President Erdoğan said on Thursday that he has reservations about US plans.

According to the TEV-DEM’s Hanifa, the US-led coalition “has supported Arab tribes in Deir ez-Zor with millions-of-dollars-worth arms, and in the end, it all ended up in the hands of ISIS,” in an apparent reference to the Pentagon-backed New Syrian Army (NSA). The NSA lost the battle for al-Bukamal in late June this year

“The YPG is the only force that has liberated major Syrian areas from ISIS, and sacrificed over 4000 of its fighters in this fight,” Hussein said.