Syrian Kurds Deserve a Seat at the Negotiating Table 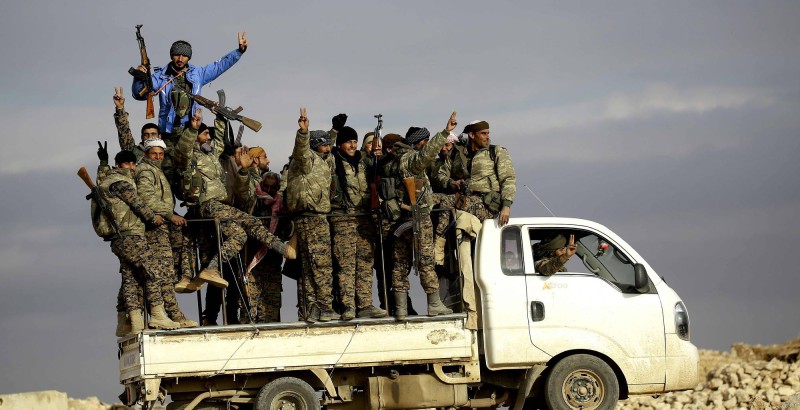 By Stuart Rollo
The beginning of 2017 is shaping up to be a critical period in the Syrian Kurds’ campaign to defeat Islamic State and secure a measure of political autonomy in their homeland. How President-elect Trump manages the competing interests and alliances in Syria will directly affect the Kurds’ destiny. He ought to stand with these steadfast American partners.

Since 2012 the Syrian Kurds have occupied a precarious political position. They have been crucial American allies against ISIS. The Russian government has also courted them, particularly during Russia’s period of intense enmity with Turkey in late 2015. For long stretches the Syrian Kurds have also participated in an unofficial truce with Syrian President Bashar Assad’s government.

Amid this tangle of relationships, the Kurds’ connection with Turkish President Recep Erdogan may be the most important in whether they will secure some form of autonomy. Mr. Erdogan views them as a threat to Turkish territorial integrity, due to their alleged links with the separatist Kurdistan Workers’ Party, known by the Turkish acronym PKK.

Mr. Erdogan was an early supporter of the Free Syrian Army, but as the conflict progressed and the rebellion was taken over by radical Islamists, Turkey shifted its support to those groups, including Ahrar al-Sham and Faylaq Al-Sham. Ankara did this with the hope of replacing the Alawite Assad regime with a Sunni-led government, which would owe Turkey its allegiance.

Turkey hosted Syrian political dissidents in the earliest stages of the rebellion and provided the Free Syrian Army with a secure base of operations within Turkey. Arms from Saudi Arabia and Qatar were flown into Turkey en masse and distributed to rebel groups across the border. As the conflict escalated and militant Islamist groups, including ISIS and Jabhat Al-Nusra, became the most powerful rebel factions, Turkey continued facilitating the flow of arms, cash and recruits across its border.

Turkish involvement in Syria has hurt its relationships with the U.S. and Russia. The U.S. has often seen Turkey’s involvement as hampering the war against ISIS. Turkish support for the rebellion is contrary to Russia’s actions to preserve the Assad regime, and the downing of a Russian warplane by the Turkish military in August 2015 saw the nadir of an already troubled relationship. Turkey has also been accused by international media as well as by the Russian government of supporting various terrorist groups, including ISIS. This has hurt its international reputation as a responsible steward of regional stability.

Mr. Erdogan continued to pursue regime change in Syria long after it had become clear that the U.S. wouldn’t intervene to topple Mr. Assad. However, when Aleppo fell to regime forces in December, Turkey co-sponsored with Russia a cease-fire, which was signed Dec. 30.

Now Turkey’s main priority is to suppress Kurdish autonomy in Syria. The Turks are using the cease-fire to marginalize the Kurds by escalating their military assault on Kurdish positions. On the same day the cease-fire went into effect, the Kurdish media reported that Turkish military and Turkish-backed Islamist rebels were attacking Kurdish towns and militia security offices.

The Assad regime is also putting pressure on the Kurds and insisting they acknowledge the regime’s authority. In a Dec. 27 meeting with Kurdish representatives, the regime offered support as long as the Kurds vowed to back Assad in upcoming elections. The regime also demanded that the Kurds abandon their pursuit of a federal system for Syria and hoist the Syrian flag over government buildings and offices.

Yet political support is more crucial than arms. The Trump administration should make clear that its support for the Kurds extends beyond the fight with ISIS. He should affirm their right to self-directed political and civil representation in Syria. The best way to start is by insisting that the Syrian Kurds have a seat at the table in negotiating an end to the Syrian civil war.

The U.S. has a mixed record with arming the Kurds and encouraging their ambitions for self-determination. American support has been instrumental in the success of the Kurdish Regional Government in northern Iraq, but Washington has also abandoned the Iraqi Kurds many times.

If the new American president stands firm, the State Department will have to balance U.S. support for Syrian Kurds with assurances to Turkey that the PKK will not be empowered. Fully siding with Turkey will go down as another cynical betrayal.

Mr. Rollo writes on international security. He is currently at Sydney University, working on a research project investigating strategic minerals and international politics.