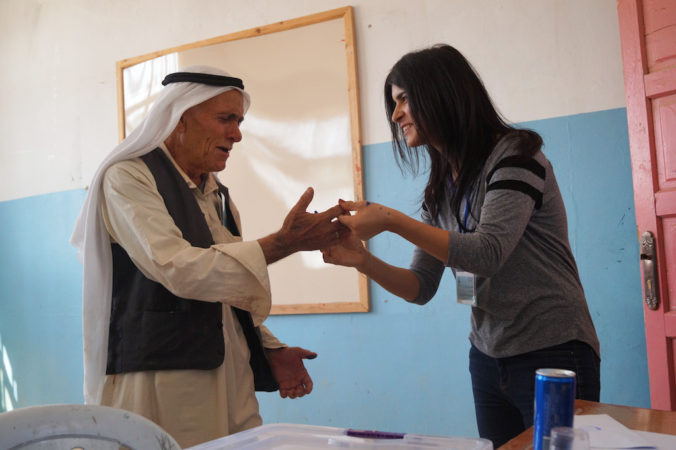 A young woman, a member of the electoral staff, helps a man vote in the September 22, 2017 elections in Kurdish-administered areas of northern Syria. (Image: Wladimir van Wilgenburg)

(KOBANI, Syria) – The city of Kobani in northern Syria suffered under an Islamic State siege from 2014 until the U.S.-led Coalition decided to back the Syrian Kurds, eventually defeating ISIS after a battle that lasted more than six months.

Every family in Kobani has lost someone to ISIS and even now hundreds of civilians remains in the terror group’s hands. They were kidnapped on the roads in Aleppo or Raqqa before 2014 and nobody knows if they are dead or alive.

But on Friday, three years after the fierce ISIS attack, the Kurds in Kobani voted for leaders for their local communes.

These communes are based on the ideology of the imprisoned leader Abdullah Ocalan, of the Kurdistan Workers Party (PKK), who is serving a life sentence in Turkey, and inspires the Syrian Kurdish Democratic Union Party (PYD).  Ocalan was influenced by the American sociologist Murray Bookchin from Brooklyn, and calls for bottom-up rule by local communes, and autonomy for the Kurds divided across Iraq, Iran, Syria and Turkey. Kurdish critics say the system has authoritarian tendencies and that there is no space for rival ideologies.

Despite this, Turkey has rejected any form of Kurdish self-rule in northern Syria and has threatened the last few months to attack the Kurdish town of Efrin which lies close to the Turkish border.  Syrian Kurds in Kobani have found no peace. Still dozens of them are fighting with the U.S.-backed Syrian Democratic Forces in Raqqa, pledging to stay until ISIS is defeated. SDF officials say they will go anywhere to fight ISIS and terrorism.

Nevertheless, the elections are one sign that there is a future after ISIS. The Kurds that have managed to control large territories in northern Syria due to U.S. support now plan to form a federal region across three regions in the north.

“This is the first time that the Kurdish people vote. In the past, the Arabs, the Turks and the Persians told us that we were brothers under the name of Islam, but they were deceiving us,” Nabo Sheikho told The Globe Post after voting on Friday.

“Today we are very happy because we voted for our Kurdish people,” he said.

Voters had the chance to choose commune co-chairs from 1,2421 candidates in 3,732 local communes in the federalized regions of northern Syria. More elections will be held in November for local councils, and in January for a parliament.

“Every vote goes to a man and a woman. Their pictures are on the election cards and we knew them before,” Mr. Sheikho added. “This is the first time elections are held in Rojava. This raises our moral and we are happy, because we were occupied before and we did not have any rights, but today we can vote and have our rights and language.”

Rojava, or “Western Kurdistan,” refers to the historically Kurdish lands in northern Syria. Friday’s elections took place across the Democratic Federation of Northern Syria, the fledging autonomous region that includes both majority-Kurdish and Arab lands freed from ISIS over the past few years.

“Under the regime elections were not free, and the regime even prevented us from speaking the Kurdish language. Today the elections are free,” he said.

Voters elected two co-chairs, one woman and one man, following the ideology of Ocalan. “They work for the people and not for money,” Ferhad Jamal Jolo said.

The Democratic Self-Administration, which governs the Democratic Federation of Northern Syria, is structured to enforce gender equality as well as a multi-ethnic composition. Although formed by Kurds, the leadership includes Arabs, Yazidis, Syrian Christians and Turkmen.

The Syrian regime, which has gained the upper hand in the ongoing war since last year, is not pleased with the elections that solidify gains made by the SDF during the conflict.

“[The elections] will be a joke. Syria will never ever allow any part of its territory to be separated,” Syrian Deputy foreign minister Faisal Mekdad recently told Reuters and the BBC.

Many Kurds in Kobani still have bad memories of the Syrian regime. “There were no elections in the past, they announced the results without ballot boxes. Now the people elect the persons they want,” Mr. Jolo told The Globe Post. “These people will serve the people, in the time of the regime they did not. The name of the winners were announced before the election results and they were either regime agents or paying money.”

He said he hoped that the current U.S. administration would continue to back the Kurds after ISIS is defeated. “[President] Trump is a good person because he supports us. We are a poor people and that’s why he supports us. He will free us from injustice in the future,” he said.

Abdulkarim Omer, a senior foreign relations head in the city of Qamishli, where the administration is centered, rejected the regime’s statements.

“The federalism of northern Syria is not for the division of Syria and it’s not centralized. We’ll see in the coming days that it will be a democratic federalism and this does not threaten the unity of Syria nor pose a threat to neighbourhouring countries like Iraq and Turkey,” he told The Globe Post. “We want to build a new democratic Syria after six years of fighting.”

The official said that federalism is not only for the Syrian Kurds, but for all ethnic groups such as Arabs and Christians.

“We want the northern Syria federation to become an example for other Syrian provinces. In the future, southern regions of Syria like in Daraa and As-Suwayda can also announce a federal system,” he added.

The local administration is planning to have a federal government for northern Syria with a parliament with 300 members called the Democratic Community Movement representing three regions.

The government will have one Ministry for Foreign Relations and one Ministry of Defense, the official said.  ”The regime still holds the idea that it wants to control the whole of Syria, and want to establish a central system,” Abdulselam Ahmed, another senior Kurdish official in Qamishli, told The Globe Post. “The regime does not know that federalism is a system of unity and not division.”