The Arrest of Ahmet Turk: Erdogan’s Bloody Dictatorship Must Be Stopped – Arian Mufid 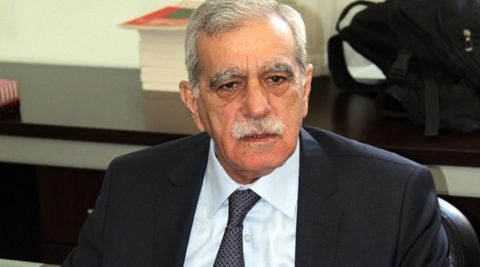 Published by Kurdistan Tribune on November 23, 2016

In light of Monday’s events in Turkey in which prominent Kurdish Peace and Democracy Party (HDP) MP Ahmet Turk was arrested, I reflected on the time three years ago in July 2013 when I met this great man for 25 minutes in Erbil, the capital of south Kurdistan. Following the meeting I realised the immense contribution this man had given to the Kurdish struggle and his undiminished fight for justice, both of which he had devoted his life to. He was there advocating Erdogan’s initiatives at that time to resolve the Kurdish problem and since 2009 those two leaders had been very close, to such an extent that they shared in each other’s problems as well as celebrations, with both parties agreeing to end the killing and bloodshed in Turkey. All observers are amazed at the way this bond of the two leaders started and finished.

Ahmet Turk first became an MP in 1973 for the Democratic Party of Turkey, and following this he joined the Turkish Republican Party in 1974 where he stayed for six years. He has also been a leader of the Mardin Council for several years. However, the Turkish military state jailed him for three years in 1980 and in his memoir he wrote that he was subject to all kinds of torture and humiliation in the Turkish jail. He described the conditions as being so bad that they were worse than a South African jail. On one occasion he recorded a note written on one of the clubs used by a Turkish torturer stating “God is not here and the Prophet is also on annual leave”; he described his torture as being so harsh that it made him wish that God would take his life away. Again in 1994 he was jailed for another two years. Today’s events show that the military state in Turkey is under pressure from Erdogan to demonstrate that the army is doing something to kill democracy and build his rule of authoritarianism. The opportunity has been wasted for Erdogan to solve the Kurdish issue. Erdogan like other dictators is obsessed with power and the suppression of democracy and justice.

The Western world now needs to intervene in Turkey before the country’s situation gets out of hand and leads to civil war. The atrocities and killing machine of the Turkish military state directed against the Kurdish nation in the north of Kurdistan is unprecedented in the modern world. The arrests of Ahmet Turk, Selahattin Demirtas and the other MPs and activists are a breach of basic human rights and completely unacceptable. If Turkey continues in this trend it means that the open gate of terrorism to the Western world will be widened and expanded as it is all going through the Turkish route. What Erdogan is doing goes against the principles of modern Turkey and needs to be stopped before there is any further escalation of bloodshed.