The case of Kisanak and Tuncel: Resistance and the theatrics of repression – John Hunt 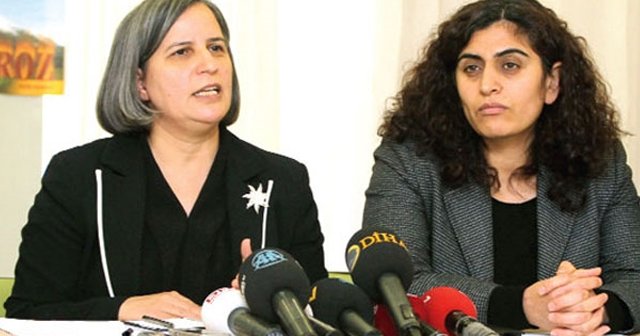 The two defendants greeted us with broad smiles as we squeezed into the small courtroom in Malatya, where the police had already occupied half the seats, forcing most of our crowd of supporters to stay outside. Gultan Kisanak, the co-mayor of Diyarbakir and Sebahat Tuncel, co-leader of a party affiliated to the Peace and Democracy Party (HDP), exchanged snatched greetings with their friends and loved ones as the trial got underway. But they weren’t really in court with us. We could only see them on a video screen connected to a room in Kandira maximum security prison, 1000 kilometres away, where they’ve been held for a year on charges for which the state demands sentences totalling more than three hundred years.

“This is classical Turkish theatre”, Ms Kisanak’s husband Zulkuf later observed in the proceedings against these two renowned Kurdish politicians and former MPs. On the crucial matter of evidence to support the prosecution’s case, there was perhaps the illusion of improvised farce. On Friday 3rd November we attended the sixth hearing in this trial and only the second session presided over by the same judge. He’d adjourned the previous hearing to get more evidence from Diyarbakir’s 8th Court of Serious Crimes, which had opened the case before it was transferred to Malatya, 240 kilometres away, where there are more junior judges and less prospect of big protests. But the evidence never came, and the Malatya judge blamed the Diyarbakir governor for not responding to his request. “Has nothing arrived?” quizzed a defence lawyer.

The missing tapes and a CD are meant to corroborate the prosecution’s transcripts of statements that Ms Kisanak is alleged to have made on various occasions since 2011, accounting for 41 charges in a 21-page indictment. The judge even asked Ms Kisanak’s lawyers to help him press the Diyarbakir court for this evidence while stating that he expects the trial to conclude in another one or two hearings.

“Where are these records and tapes?” Ms Kisanak asked him. “Have you listened to them? Maybe they don’t exist!”

“So far I have only made a general defence”, she said. “I haven’t used my rights to defence yet. I want to appear in person and present my defence case by case”.

Her lawyers say that even in the prosecution’s unsubstantiated transcripts, Ms Kisanak never advocated violence and all the speeches cited were made at public events such as Newroz (Kurdish New Year), the International Women’s Day celebrations and the funerals of local youths who died in Kobane, across the Syrian border, resisting an ISIS onslaught.

She is charged with being the “director of an armed organisation” and allegedly visiting the Democratic Society Congress (DTK) headquarters eight times, although the very same DTK was invited to submit proposals to a Turkish parliamentary commission on constitutional reform. She is also indicted for allowing vehicles of the Diyarbakir Municipality to carry the bodies of PKK fighters from the morgue to cemeteries for burial, although it would have been unlawful for her to obstruct standard burial procedures. Notably, these are the only charges concerning mayoral activities although prior to her arrest state auditors vainly trawled the local authorities’ books for evidence of any corruption or other infractions.

Speeches account for most of Ms Tuncel’s indictments, along with a claim that she visited PKK guerrillas in the Qandil mountains for “political training”, a charge based solely on the statement of an anonymous witness who has yet to appear in court. Ms Tuncel urged the judge to show courage in upholding the rule of law and her democratic right to oppose the government. “The Kurdish question is a political question”, she said, putting the trial into context while decrying the end of peace talks between the state and jailed Kurdistan Workers Party (PKK) leader Abdullah Ocalan.

Thousands of HDP members, including dozens of mayors and MPs, were detained following the collapse of the peace process which coincided with the party’s electoral breakthrough in June 2015. The repression accelerated after last year’s failed coup, which President Erdogan called a “gift from God” granting him emergency powers against all his opponents. Lawyers believe the cases against Ms Kisanak and Ms Tuncel were prepared by police officers and judges, who have themselves since been arrested for their alleged links to the cleric Fethullah Gulen, Erdogan’s former ally now accused of plotting his overthrow. “You don’t trust these people but are using their evidence”, Ms Kisanak told the court.

She was detained last October at the same time as her co-mayor Firat Anli, but by different police forces and on separate charges. Her lawyers and supporters say this proves these are political prosecutions intended to reverse progress towards self-governance – which the Kurdish movement calls ‘democratic autonomy’ – in Diyarbakir and across the south-east of Turkey.

“In Diyarbakir, a city of two million, the elected representatives have been replaced by a commissioner appointed by the state”, said Ms Kisanak. “Without local democracy, there can be no democracy.”

Serra Bucak, Diyarbakir’s deputy mayor, told me that she’s been unable to perform her civic duties since Cumali Atilla was appointed as commissioner. Prior to the ongoing purge against pro-Kurdish and pro-minority politicians, the municipality of Diyarbakir implemented a co-mayoral system. Responsibilities had to be shared between a man and a woman at all levels of governance. The municipality opened its meetings to the public and involved local people for the first time in discussions on the city’s budget. But Mr Atilla has stopped the councillors from meeting and axed their reforms.

A Directorate for Gender Equality, for example, was set up in 2014 to boost women’s employment and training and curb domestic violence, including by paying the wages of abusive husbands to their wives. The commissioner abolished the directorate and sacked its 40 female staff. He also banned multi-lingual nursery education, cut funds to a theatre group performing Shakespeare in Kurmanci, halted the development of a city forest park, demolished a statue commemorating the 2011 Roboski massacre and excluded local communities from a new Kurdish cultural centre that opened just before he took control.

“There is a fearful atmosphere, with regular armed patrols”, said Ms Bucak. Diyarbakir is traumatised by the deaths, displacements and destruction of much of the historic old city of Sur that followed unequal clashes between state forces and local youths after the collapse of the peace process. All the Kurdish TV stations have been shut down, except for one broadcasting children’s cartoons which was closed then reprieved following public ridicule. Thousands of local teachers have been sacked or forced to relocate outside the region.

There are fears of creeping Islamisation designed to smother Diyarbakir’s diverse heritage, radical politics and predominantly Kurdish culture. “It doesn’t feel like my city anymore”, said one resident. However, it’s unlikely there’ll be any significant revival here of the AKP, Turkey’s ruling party, partly because the repression has been so cruel. Too many parents are mourning for their children who died at the hands of President Erdogan’s special forces.

Ms Bucak is appealing to mayors across the globe to help break the silence about this destruction of local democracy. “We urge them to support us and take up the cases of Gultan Kisanak and all the other jailed Kurdish mayors”, she said.

The Malatya trial defendants are inspiring models of resilience and dignified defiance. Iconic photos show Ms Tuncel being dragged into custody by five cops with a police officer’s hand clamped across her open mouth. Ms Kisanak carries the scars of torture she endured as a student who was caged in Diyarbakir Prison after the 1980 military coup. Today she is indicted for speeches she made, marking the anniversary of the coup, outside that demonic jail which her administration wanted to turn into a museum.

“I was always fascinated to hear my mother talk about peace and democracy even though she was aggrieved brutally in her young years”, said her daughter Evin Kisanak. “Visiting her in prison now I can see that she’ll never give up”.

“These trials have nothing to do with legal process”, said Ayse Berktay, an Istanbul-based writer and HDP activist who has done two and a half years jail-time. “There are parallels with the trials of witches in the Middle Ages”. The persecution of the HDP is designed partly to suppress its innovative campaign for gender equality, she said. Five of the party’s nine jailed MPs are women and Gultan Kisanak is a trailblazer as a female mayor of one of Turkey’s big cities. Another factor is the party’s appeal, beyond its Kurdish base, to other oppressed groups and progressive Turks. “In response to authoritarian nationalism we propose the democratic nation”, said Ms Berktay. “There are some lessons in our experiences for democratic movements around the world”.

At another HDP trial on 3rd November, Selma Irmak, the MP for Sirnak, was sentenced to 10 years imprisonment. HDP co-chairs Selahattin Demirtaş and Figen Yüksekdağ are due in court on 6th and 7th December. The Malatya trial resumes on 8th January. Perhaps these legal contrivances are meant to silence the voices off-stage. However, there was an auspicious moment in Maltaya when defiant chants of other women political prisoners at Kandira drifted from outside the room holding the defendants into the courtroom. “We will win through the resistance”, they sang.

John Hunt is an editor, journalist and communications consultant who has visited the Kurdish region several times as an elections and human rights observer.