Most recently, three people including two children named Yusuf KOVAN (14) ve Avebnd HISYAR (6) were killed on May 26, 2022 in Bamernê – Douhok. Three more civilians were injured in the attack.

Since the occupying Turkish state´s and the AKP government´s decision on July 24, 2015 to once again pursue a war policy, the attacks on South Kurdish villages and cities continue. As a result of thousands of Turkish air strikes carried out by the occupying Turkish state all over South Kurdistan – especially in Mexmûr (UN-Refugee camp) and Şengal (Ezidis who survived the IS massacre) – at least 168 civilians have lost their lives and hundreds more wounded. This includes many women and children.

While many of these massacres have been documented by the NGO Christian Peacemaker Teams – Iraq (CPT), others have been reported by sources from the local civilian population.

If the number of civilians that were killed by Turkish Unmanned Aerial Vehicles (UAV) and by Turkish assassins in Sulaymaniyah, Maxmur and Sinjar (Şengal) are added, it becomes clear that the Turkish state has murdered at least 168 civilians in South Kurdistan since 2015.Here are details about some of the attacks in civilians in South Kurdistan carried out by the Turkish state since 2017. According to a report published by the Kurdistan office of the CPT, in 2021
April 24, 2017: One civilian was killed when Turkish air strikes hit the mainly Ezidi area Şengal.

December 13, 2018: A Turkish air strike killed three women and a young girl and led to heavy material damage in the refugee camp Mexmûr.

January 23, 2019: Four civilians were killed in an air strike in Dêralok (Amediye). Despite being obstructed by local security forces, the local population took to the streets on January 25 in Dêralok to protest against the massacres carried out by the Turkish state. As a result of an attack of Turkish soldiers, two more civilians – including a child – died and six more were wounded.

June 25, 2019: In an attack by a Turkish war plane on a civilian car in the Goşin area (Soran/Hewlêr), one civilian was killed and one more heavily injured. The victims were brothers. 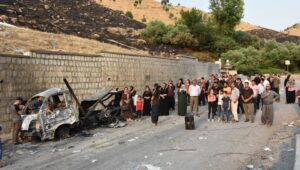 July 19, 2019: Two youths were wounded as a result of a Turkish air strike on the refugee camp Mexmûr.

October 15, 2019: Seyitxan Ayaz and Eser Irmak were killed in a Turkish drone strike in the city of Süleymaniye. Both had been political activists working to raise awareness for Turkey´s attacks.

June 18, 2020: Ebas Mexdît was killed in a Turkish air strike in the area Sidêkan. 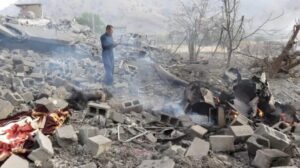 June 24, 2020: Two civilians died in a bombardment of a picknick area in the area Şarbajêr close to Süleymaniye city.

May 25, 2021: 20-year-old Bawer Ahmed was wounded by artillery shelling by the Turkish state while watering his fields in the village Deşişe. Other farmers in the area were also wounded due to shrapnel.

May 26, 2021: 16-year-old Ali Muhsin and 20-year-old Hasan Muhsin – both brothers – were wounded while feeding their animals when the Turkish state bombarded the village Biherê.

June 1, 2021: 70-year-old Ramazan Ali was wounded by artillery shelling from soldiers of the Turkish state while he was watering his fields in the village Hirûre.

July 8, 2021: One civilian was wounded in Hirûre village when fire was opened on the fields from military stations of the occupying Turkish state.

August 13, 2021: Ibrahem Hassan Mohamad (51) was shot by soldiers of the occupying Turkish state while he was watering his fields in the village Deşişe (Kanî Masî). The village´s inhabitants were forced to leave their homes as a result of the Turkish army´s operations in the area that started at the beginning of that year. Mohamad had returned shortly afterwards together with 12 other villagers in order to be able to water his fields and thus provide for his family.

August 20, 2021: Ahmed Şakir (40) and Yousif Amir (26) were murdered as a result of artillery shelling by Turkish soldiers in the Batifa area (Zaxo). Şakir and Amir had come to the area from Mosul as tourists. Their families found out about their deaths when the bodies of Şakir and Amir were found two days later.

September 16, 2021: The North Kurdish refugee Ferhat Bariş Kondu was heavily wounded by MIT (Turkish intelligence service) hitmen while opening the office of the bus company Can Diyarbekir in the city of Süleymaniye.

September 17, 2021: 64-year-old Yasin Bulut was shot by MIT hitmen in the city of Süleymaniye.

May 17, 2022: The North Kurdish refugee Zeki Çelebi was shot by MIT hitmen in the city of Süleymaniye while leaving the restaurant he owned.

The world continues to ignore the crimes committed by the Turkish state although all this is happening before their eyes:

It is noteworthy that all the South Kurdish civilians that have been killed by Turkish attacks are being denied official recognition by the KDP-led Kurdistan Regional Government (KRG). In their death certificates, the reason for their death is not being given despite them clearly having fallen victim to Turkey´s attacks on South Kurdistan.