The Trial of Figen Yüksekdağ and Selahattin Demirtas – Blog by International Observer and Barrister, Margaret Owen 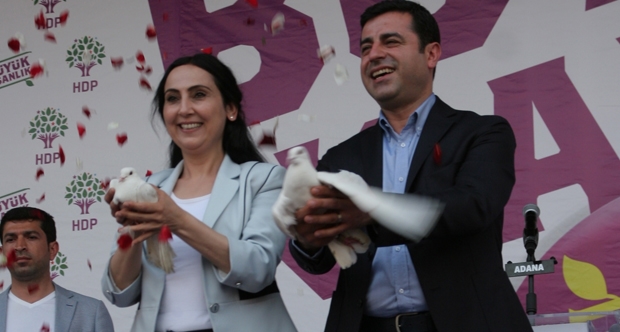 Published by Peace in Kurdistan 8 Deecmber 2017

Ms Figen Yüksekdağ is charged, under the Anti Terror Law, with inciting violence, making propaganda for a terrorist organisation ( PKK)  and establishing and managing a terrorist organisation. These accusations were made on the basis of speeches she had made, as an elected MP, both inside and outside parliament between 2011 and 2015. Figen, as an elected member of parliament, and co chair of a legal political party, was simply doing her job. It was absurd to allege that her speeches were promoting terrorism. There is no evidence that she organised or is a member of a terror group.

The Prosecutor had asked for 142 years in prison, but later today, he asked for aggravated life Imprisonment. This is the harshest sentence of all. But President Erdogan hopes to bring back the death penalty.I write as one of 40 international observers, lawyers , MEPs, parliamentarians, NGO members and trade unionists from 10 different countries, who came to Ankara to attend this trial, but have been deeply shocked by the developments today which show, most dramatically and clearly, that there is no independent justice system in Turkey, and the principles of the Rule of Law have been completely abandoned.

Two days before our arrival, suddenly, the venue for this trial was changed. Instead of Ms Yüksekdağ appearing in the Ankara Court, the trial was moved to the court in the Siacan Prison Complex, some 40km from the capital, an hour away.Briefed by the HDP very early on an exceptionally cold morning, we reached the prison around 9.a.m, first in a coach and then at the outskirts of the prison buildings, we were transferred to a bus packed with prisoners’ families, many women, and small children, all of whom looked wretched and sad.But on arrival, having been ordered to leave our iPads, phones and cameras in our coach, we were told , to our indignation, that we had no accreditation and would therefore not be allowed to attend the trial.We were furious. In fact, in Turkish law, there is no requirement for accreditation, and courts, under the constitution, as well as under international conventions, must be open and trials public. But In any case, the Court had had, in good time, a list of all those in our delegation. They knew who we were. They expected us.

For nearly 3 hours, as we pleaded for admission, we had to stand outside the court in near freezing temperatures, surrounded (at times far too closely) by scores of riot helmeted balaclava clad police, who banged their shields at us in a most intimidating way, whilst inside the court, we were informed, judge, prosecutor and police argued over our right to enter the building. The judge had decided in our favour, but the decision of the police and the prosecutor to bar us won the day, and we were ordered to leave. Danish, Norwegian and Swedish Embassy officials protested loudly to the Police Captain that this order breached international criteria for fair trials. We all remonstrated in unison, holding up our passports to indicate our provenance. In the meantime, many AKP supporters had been allowed entry. The timing of all this made us suspect that the judge was a servant to others higher up.

When asked, by Yüksekdağ herself , and her lawyers, why our delegation was sent off, the judge declared it was due to « security considerations ». It was not clear whether we were the danger, or we were in danger!

Forced to return to Ankara, we met with the HDP and lawyers who filled us in on what had gone on in the preceding weeks, and during this morning.

Because the trials of Demirtas and Yüksekdağ had attracted such outside attention, the authorities were determined to restrict observers to the minimum. We learnt that buses from the regions had been stopped from entering Ankara. Also, all protests and public meetings had been banned this week.

Also, while Yüksekdağ was appearing in person in the prison court, Demirtas, a lawyer himself and such a charismatic orator, had been refused appearance in court, and instead confined to a video attendance. The authorities were keen to avoid the inevitable excitement and furore that his presence would inspire in his supporters. Demirtas has refused this option. We will find out tomorrow what this means for his trial.

We were told that everything that has happened to Yüksekdağ since her arrest and imprisonment last November has been unconstitutional and unlawful both under domestic Turkish Law and International Conventions.

A person has a right to be informed of the charges and to know in advance the venue of the trial. The conditions in Turkey’s overcrowded, dirty prisons fall far below international standards. Torture is rampant. Health care minimal. Often, for the most trivial or fictional reasons, punishments and further restrictions are common. Solitary confinement is also common practice. Figen and many other political prisoners spent the first 45 days of prison in this condition.

We anticipated Figen’s case would be adjourned, and at the end of the day it was. Adjournments are a common way of dragging out incarcerations, without actual convictions and sentences, for years.

There were at the start of the trial 10 separate “dossiers” of charges, under the Anti Terror Act. These have now been gathered into one, giving the grounds for an adjournment until 20th February 2018. Figen is to remain in prison till then. No doubt more new charges could be added by next year, and since such additions enable further adjournments, the agony and injustice continues.

Our long day ended with HDP hosting a supper for us all, at which Figen’s lawyer Gulseren Yoleri described eloquently and movingly the shocking deterioration of the Turkish justice system, the huge numbers of political prisoners, the closing down of independent media outlets, of the bans on freedom of association and expression. A female MP, Feleknaz Uca, also spoke at the dinner. Uca’s immunity has been lifted, her passport cancelled and she fears her own arrest. Our hosts, other Turkish Kurdish lawyers all told us how much our presence here in Ankara was needed and valued, and begged us to do all we can in our European countries to bring pressure on Erdogan and the AKP to stop their descent into a Police State where no one is safe and free.

Image supplied by Margaret Own

Another icy grey morning in Ankara, and we international observers again pile into two coaches, and then into the crowded buses for the drive to Sincan Prison Complex. On the way we discuss what we predict will happen this day, when clearly Demirtos will not be defending himself in person nor on video, and the position of our respective governments might be in response to further evidence of Turkey’s rejection of international standards for fair trials.

Thé scène on arrival is dramatically different from yesterday. There are hundreds of people assembled on the muddy concourse outside the prison. Somehow, in spite of the ban on buses coming from the south-east and other regions, many people have found ways to get here to support their beloved HDP Co-Chair. His passionate and fiery speeches in Parliament and outside, at rallies and press conferences, calling for human rights not just for Kurds, but for everyone in Turkey, for an end to violence, for the rights of women, for peace, have made them fiercely proud of him, and they are furious at his detention.

There are many women, of all ages, in the crowd. Everyone is muffled up in woolen hats and scarves for the wind is bitterly cold. There is a lot of hugging , and we, recognisable as the foreign observers, are warmly greeted, and embraced. Surges towards the gate are roughly stopped by a squad of police, and on this day there seem to be many more of them around us than yesterday.

I am glad to see James Ford from the British Embassy has come to join us, and two members of the House of Lords.

But It soon becomes clear that we will not be allowed in to the court. so there is little point in staying around.

We learn that Demirtas’ trial is ongoing’ , in spite of him not appearing on video. But as we leave the area we see that the police are edging nearer the crowd with the water cannon at the ready. The atmosphere is tense, and people are angry, taking photographs of each other holding banners bearing Kurdish slogans, HPD logos and pictures of Demirtas.

Back in the city, the HDP. arranges an afternoon meeting for us, with Demirtas’ lawyers returned from the court. We learn that Demirtas, like Yüksekdağ, must remain in prison, the trial is adjourned until February 14th. However, (although anything can be changed) , the Court agreed that the defendant would be permitted to appear in person, and in the Ankona Regional Court, not the prison one.

The MP, Hisyar Ozsoy, Vice-Co-Chair of the HDP Foreign Affairs Committee,a distinguished lawyer, described the complex political background to these trials, emphasising how important our presence was, and asking us to be sure to return, in even greater numbers, to observe the February hearings. « Come back, with ever more people . We want to have you here in February. ».

.He asked us to redouble our efforts to disseminate information on what is happening in Turkey to as wide an audience as possible, so that pressure can be put on Erdogan by our governments to halt the descent into the abyss of dictatorship and persecution. He spoke at length of the strange new alliances Erdogan is making, and of the critical impact his xenophobic, dictatorial way of governing is impacting not just on Turkey, but on Europe and the world. He warned that if Turkey does not draw back from the direction it is heading, it will take decades to get her back on the right track towards democracy, justice, and respect for the Rule of Law.

The lawyers for Demirtas denounced the methods used to indict their client. The charges were based on fictions, there was never any concrete evidence. In these cases, there is no presumption of evidence .Rather, the burden of proof lies on the accused who must prove that he or she is not a terrorist. We learnt more about the appalling conditions in which Demirtas was held in the first months of his detention,the restrictions on family, friends and lawyer visits, but above all, how today there is « no law in Turkey ». Everything is arbitrary .

Every lawyer involved in these cases is at risk of arrest under the present emergency laws. We met many who have been in prison, or are under investigation, and whose passports have been cancelled. They are brave men and women.

Hisyar Oszoh said he was ashamed that we, thé international observers, had been so badly treated and insulted, but believed that with our help and our governments , « we will overcome ».

I read out a statement from our international delegation, written by our colleague, London solicitor Ali Has, which we hope to get widely circulated and published. Tomorrow we all go home