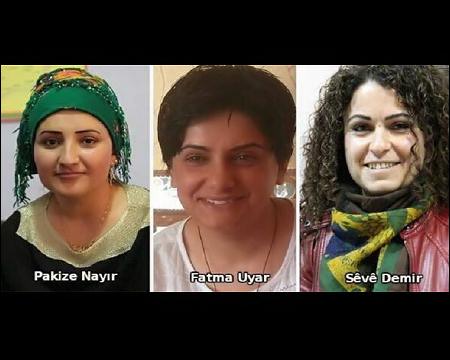 DIYARBAKIR-AMED, Turkey’s Kurdish region,— Three female Kurdish politicians have been killed in fighting in a curfew-hit town in Turkish Kurdistan as the authorities press an offensive against the outlawed Kurdistan Workers Party (PKK), the main pro-Kurdish party said Wednesday.

The Peoples’ Democratic Party (HDP) said three of its female campaigners and another as-yet-unidentified man had been shot and badly wounded in Silopi town in Sirnak province late on Monday, accusing the Turkish authorities of failing to evacuate them despite pleas. All four died.

The HDP identified the three women as Democratic Regions Party (DBP) Parliament Member, Seve Demir, Free Woman Congress (KJA) member, Fatma Uyar, and Silopi People’s Assembly Co-Chair, Pakize Nayır. The man has not been identified because his face was so badly disfigured, it said. It was not clear under what circumstances they were hit or who fired the fatal shots.

“These three women and the man were shot on Monday in the evening. They called to say ‘We are wounded and losing blood, so get us out of here’,” Leyla Birlik, the party’s MP for Sirnak province, said.

“The HDP asked the authorities to evacuate them (from Silopi) but got no response,” she added.

Silopi has been under curfew since December 14 as the authorities wage a major military operation to crush the PKK in the Kurdish region in the country’s southeast.

The government says the PKK effectively took over towns by erecting barricades and digging trenches. But Kurdish activists say excessive use of force has killed dozens of civilians.

There was no immediate comment on the incident from the authorities. Pro-Kurdish media insisted they were civilians and not combatants.

“The targeting of three women in the vanguard of the resistance was not a coincidence. They targeted the freedom struggle of all women,” HDP’s co-leader Figen Yuksekdag said in a party statement.

Buldan: Not different than Paris massacre

According to Dicle News Agency, HDP PM, pervin Buldan said, “It is not different than Paris massacre. Three lives have been massacre. Blast it”.

Özden: They phoned us wounded

DBP Silopi District Co-Chair, Gülşen Özden speaking to Hatice Kamer with BBC Turkish in Silopi as to killings of politician women said she received a phone call around 7:35 p.m. and the voice on the other end said they were shot and called for an ambulance.

“They phoned me again in a few minutes. They hung up the phone saying ‘We are losing blood, hurry up. We all will die if you don’t come in 10 minutes’. I asked deputies to send an ambulance right away, then I phoned the number over and over but no one answered. We learned that they were opened fire on as they were trying to get to Yeşiltepe neighborhood from the other side of the river with a man. They ran wounded under the bridge. That is where they phoned us”.

İrmez: No ambulance sent by saying there is conflict

HDP Şırnak MP, Aycan İrmez, told that three politician women murdered were in the neighborhood among people and contacted her frequently to fill them in about condition of local community.

İrmez stating that they tried to contact the governor yet couldn’t receive any repond said, “The governor reportedly said that they cannot refer ambulance to the scene as there is conflict. Afterwards, we learned that four bodies were taken into Şırnak State Hospital at around 11 p.m.

“However, police blocked us 200 meters away from the hospital. Our MP friend Leyla Birlik identified the bodies of our three friends at morgue. There is a male body with them but he is yet to be identified”.

Birlik: I believe they were executed wounded

HDP Şırnak MP Leyla Birlik said she believed they died while they were wounded.

“Faces of the man and our women friends were damaged to an extent that it was hard to identify them. I believe our friends were executed wounded just like Hacı Birlik because when they sought aid on phone, Seve was reportedly injured, but there was wound in Seve’s leg as well and received a major blow in the head. I could only recognize her by her beautiful hair. We cannot express the savagery here by words”.

Ayhan: They were civilians

HDP Urfa MP, İbrahim Ayhan, reminded that politician women murdered were in the party for a long time and added, “They were civilians and well-known figures. We believe they were targeted and murdered”.

The PKK initially took up arms in 1984 against the Turkish state, which still denies the constitutional existence of Kurds, to push for greater autonomy for the Kurdish minority who make up around 22.5 million of the country’s 78-million population, in Turkish Kurdistan, the Kurdish region in the southeast. The conflict has left tens of thousands dead.