Published by The Voice of America, September 17, 2015
DOHUK, IRAQ— His only weapon against Islamic State extremists is a simple cellphone. But Khaleel al Dakhi has used that phone to rescue at least 100 Yazidi women and girls grabbed from their homes by Islamic State fighters a year ago.Since then, he has recorded every phone call from every girl captured by IS militants, from her relatives, contacts and informants. He has files on every rescue.

“Every rescue needs a different plan. Everyone is different,” said Dakhi, sitting on the couch with one leg tucked under him, scrolling through his phone.

Al Dakhi was a Yazidi lawyer in Mosul before IS seized the city and everyone in it who did not manage to get out in time.

“I know every street and every corner,” he said, “And what I don’t know, I have friends there who do know.”

Sometimes the captured Yazidi women manage to persuade their IS guards to let them use a cellphone, and they call home, or call al Dakhi directly. His number has been widely publicized. He then tries to track the women down.

“We know where some of the IS leaders are living in Mosul, so when they refer to ‘Abu Ahmed,’ for example, we know where the girl is located,” he said.

When IS extremists stormed northern Iraq in 2014, they captured more than 5,000 Yazidis, an ethnic and religious minority group that has lived in the area for centuries.

The younger women and girls were parceled out to IS fighters as sex slaves. Many were then sold on to other fighters, including to IS militants across the border in Syria.

“They have actually made it a key strategic objective of their campaign,” Bangura told VOA.

Al Dakhi is one of several “brokers” based in Kurdistan working to track down and rescue the Yazidi women.

“To locate a girl, we have some people who are taking photos of the sites, the number of checkpoints, how many guards. We have people checking for when they change shifts, when they pray, what their weak points are, and we take every opportunity,” he said. 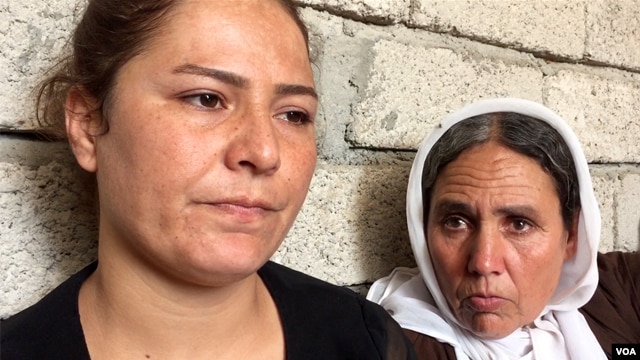 Alia looks on while her mother speaks to a VOA reporter pleading that the international community helps rescue the rest of the captive Yazidi men, women and children, including her other daughters, on the outskirts of Dohuk, northern Iraq, Aug. 2015. (Sharon Behn/VOA)

One of those girls was Alia, who was seized along with her three sisters.

Sitting next to her mother on a thin mat covering the packed dirt floor of what is now their home, Alia described days of being beaten and starved, then separated from the married women and kept in a house where she and other girls were selected for sale.

“We were frightened of them, they were scary,” she said. “When they came into the rooms, the girls would hide behind the sofas and under the tables. A girl called Jaylan killed herself. Her father, uncle, cousins and two of her brothers had been killed, and she said she had no reason to live anymore. She cut her wrists, and they put her body in a blanket in front of us, then took it away. Two of our friends hanged themselves. They were sisters.” 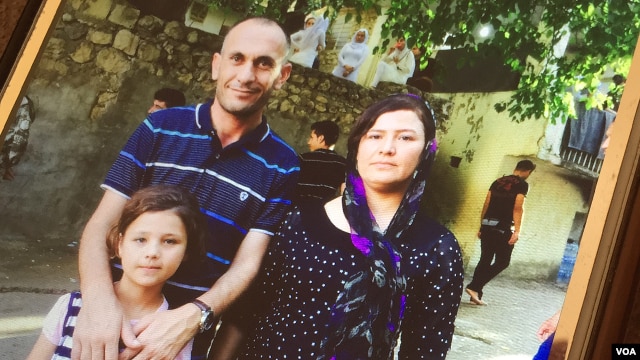 Alia and a group of other girls and one young boy were eventually sold for a stack of dollars into Syria. She said one of the guards was a man from Saudi Arabia known as Abu Salem, who beat them and took away the children.  Babies were grabbed away from mothers trying to breast-feed.

“Every day they were taking away girls and saying, ‘Your families are all dead and you are now our slaves, and you belong to the Islamic State, and until the end of your life you will never again see your families or your Yazidi people. Forget about being a Yazidi, forget your parents,’ ” Alia recalled.

Alia was bought and sold multiple times. She had been sold to a German man and his wife and was about to be sold again when her nightmare ended in July.

Al Dakhi had been tracking her for four months. He gathered information from his network of informants and from phone calls Alia had managed to make when she persuaded her captors to let her call home. He finally rescued her, her 8-year-old sister Zeena, and another woman and two children, smuggling them from house to house until they reached safety.

Alia’s other two sisters have not been found.

As time goes by, rescues are likely to become much more difficult, said Khidher Domle, a Yazidi activist who has rescued women in the past but is now focusing on getting them the physical and psychological help they need after being freed.

“Step by step, we are losing information about a lot of people. We don’t know what happened to them,” he said.

Tucked away in a small office inside the Media Directorate of Dohuk University, Domle pointed at a map of Sinjar and Tal Afar on his laptop.

Until the end of March, he said, Islamic State had been using the area between Tal Afar airport and Tal Afar city as an open prison for hundreds of Yazidi women. “No one listened to us,” including the United States, he said.

Now, Domle said, those women have been moved, dispersed around the vast area that Islamic State extremists control.

“We don’t know how many of those women and men are still alive. This is a problem,” he said. “They are disappearing. Some have been found in mass graves, some are in Syria, especially in Shadadi [northeast Syria], where we don’t have any information.”