Published by Turkey Uncensored on Januari 30, 2017

Turkey Uncensored is an Index on Censorship project to publish a series of articles from censored Turkish writers, artists and translators. 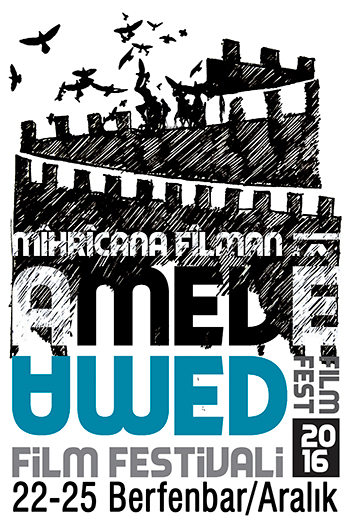 Turkey’s state of emergency, announced after July’s coup attempt, was extended for three months in January. While new executive orders continue to increase the repression of opposition journalists, academics, trade unionists, performers and institutions, parliament is discussing changes to the constitution that have been described as a “regime change”. As in the past, the state of emergency has hit Kurdish-populated regions hardest.

The Amed Film Festival was held jointly by the Diyarbakır Metropolitan Municipality Culture and Art Directorate and the Middle East Cinema Academy Association (OSAD) in 2012. The objective of the festival was to introduce viewers to films created in the Middle East in all languages of the peoples of the region, with a special emphasis on Kurdish filmmakers, and to contribute to film production. The festival also aimed to “provide the groundwork for filmmakers to be able to express themselves on a free platform”. The second festival, planned for November 2016 under the slogan “Unlimited Cinema”, could not be mounted due to the appointment of a trustee to run the Diyarbakır Metropolitan Municipality and the arrest of its co-mayors, who were members of the pro-Kurdish HDP. Or rather, the festival committee asserted that trustee mayoralties were illegitimate due to “intervention in the people’s will” and decided not to work with the trustee.

In any case, it was unlikely that the trustee mayoralty would have allowed the festival to use any of the venues under its administration. Festival organisers made a call for solidarity to local and international festivals, asking them to show their films between 22-25 December, as “the duty of art and artists under these conditions is not to shrink away, but to raise their voices to explain the reality of the times”.

The festival’s films were shown in Diyarbakır, Istanbul, Van, Batman, Cyprus and Italy. They were put on in trade associations, trade unions and other associations in Diyarbakır (Pir Sultan Abdul Cultural Association and Cemevi, TMMOB, and Eğitim Sen), at the Batman Culture and Art Association in Batman, at the Cyprus Üretim Sokağı Cultural Centre in Cyprus, and at the Mezopotamya Cinema and contemporary arts centre Depo in Istanbul. The Italian leg was organised by Gianluca Peciola from the Left Ecology Freedom Party.

Peciola had been behind the successful initiative to twin Rome’s mayoralty with Kobane in 2015, and he expressed his solidarity with the festival: “There is heavy repression in Turkey, especially in the cultural and artistic fields. We are in solidarity with Kurdish artists and the Kurdish people, whose cultural values and cultural works are being repressed in Kurdistan. We want to demonstrate this solidarity through this work.”

The festival had planned to screen 90 films but it was only able to show 45. However, the call for solidarity and the responses to that call created a positive atmosphere. In Diyarbakır alone, 2,000 people watched the films.

Director Zeynel Doğan, who sits on the festival committee, said that the festival had been stronger before, having been weakened when it lost its support. Despite this Doğan said its “energy had increased”.

After the trustee was appointed to the mayoralty, the Amed Theatre Festival was cancelled. Subsequently, 10 theatre groups from Turkey and Europe that were going to be part of the festival performed on their own stages between 21 November and 5 December in support of the festival, under the slogan “We are the reality, you are playing with reality”.

MKM Teatra Jiyana Nû, a troupe who perform in Kurdish, explained its solidarity with the festival: “The issue here isn’t merely that a festival is not taking place, the issue is that the breath that society is able to take thanks to art is being allowed to be stifled. We do not want that breath to be stifled, and even if the Amed Festival cannot physically take place in Amed [Diyarbakır], we say ‘Amed Theatre Festival is everywhere’ in the belief that one day it will definitely once again be held there.”

It is worth also noting that no large festival in Istanbul has responded to the Amed Festival’s call for solidarity: from the perspective of the Istanbul festivals, it is becoming much more difficult for regional festivals to stand in solidarity with one another.

“Cutting off the breath of society” is a good description of the repression being carried out in the Kurdish region. Fifty-two of the 106 pro-Kurdish mayoralties have had trustees appointed to them, and 76 co-mayors are under arrest on the grounds of “supporting terror organisations”. The state of emergency Executive Order Regarding the Taking of Certain Precautions shut down dozens of associations in the region. The cultural and artistic divisions of municipalities in the region are being rendered non-functional.

All the actors in the Diyarbakır Metropolitan Municipality City Theatre, which creates and puts on plays in Kurdish, have been fired. From the time pro-Kurdish parties began to take over municipalities in 1999, there was a big revival in cultural and artistic life in Turkey’s Kurdish provinces. New venues opened, regular audiences began to attend events and workshops held by these venues integrated the young people of the region into the artistic environment. Even during the peace process, these institutions were under surveillance, but despite these conditions, they made an important contribution to the protection and development of Kurdish language and culture, its use as a language of artistic production and its institutionalisation.

The dismantlement of artistic groups working at venues such as theatres under municipality control, the Cegerxwin Cultural Centre and the Amed Art Gallery is a sign that from now on these spaces are only to be used in ways that suit the political and cultural agenda of the new municipal administration.

In a funny sense, the way in which the Amed film and theatre festivals were left without support or venues after refusing to work with the trustee has led actors in Diyarbakır’s cultural and artistic world to critically evaluate their own practices. Artistic institutions that had been able to create and prosper for years thanks to the opportunities provided by municipal administrations saw this as an opportunity for cooperation with local organisations and to form an independent model of production and circulation. This also opened the way for certain ideas which had been considered before, such as travelling festivals, to be put into practice. According to filmmaker and OSAD board member İlham Bakır, another example of a future intention now being put into practice thanks to the de facto predicament of the festival was an independent structure to show films over a wider geographical area in cooperation with other institutions.

Filmmakers from the region, as part of the work aiming to restructure the Kurdish movement along egalitarian and democratic lines in political and social life, have long considered the questions of how a democratic cinematic production and distribution model can be put into place and whether a cinematic fund could be established independently of the government. Indeed, they have even invited a group of filmmakers from Istanbul to discuss the idea of a cinematic commune.

Both festivals are preparing to open their own venues in order to continue working independently.

Meanwhile, as artistic groups are no longer be able to benefit from the political advantages the Kurdish movement provided in the region, the idea of a commune has gaining traction.