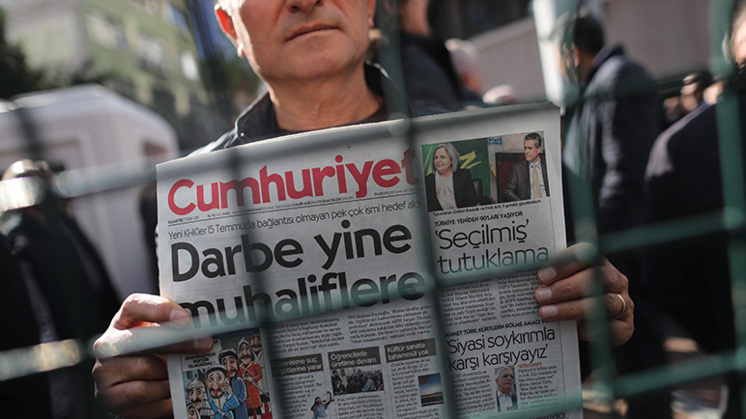 (Istanbul) – The detention of journalists from independent newspaper Cumhuriyet, the closure of the remaining Kurdish media, and the jailing of elected mayors in the southeastern city of Diyarbakir in the space of two days is evidence of the deepening crackdown in Turkey, Human Rights Watch said today.

On the morning of October 31, 2016, police detained Murat Sabuncu, the editor of the independent Cumhuriyet daily newspaper and, during the course of the day, 11 more of its journalists and managers. There are warrants out for the arrest of at least three more, including former editor Can Dündar. The Istanbul prosecutor alleges that the newspaper has “committed crimes on behalf of” both the armed Kurdistan Workers’ Party (PKK) and what the government refers to as the Fethullahist Terrorist Organization, led by the US-based cleric Fethullah Gülen.

“Targeting one of Turkey’s last independent opposition newspapers with ludicrous charges shows the depths of the Turkish government and president’s crackdown,” said Emma Sinclair-Webb, Turkey director at Human Rights Watch. “Over 160 media outlets have been closed down since the failed coup, and there are few critical voices that have not been ruthlessly silenced.”

The crackdown on Cumhuriyet newspaper caps a weekend in which the government, on October 29, ordered 15 mostly Kurdish media outlets shut down, including the Dicle News Agency, the Kurdish-language Azadiya Welat daily newspaper, and the journal Evrensel Kültür. An October 30 court ruling ordered two elected co-mayors in Diyarbakir jailed on trumped up terrorism charges.

Government decrees adopted over the weekend also summarily fired more than 10,000 civil servants, among them health workers and teachers and more than 1,200 academics, gave the president the power to appoint university rectors more directly, and ordered the recording of conversations between lawyers and their clients in detention, with the information available to prosecutors.

A Diyarbakir court, on October 30, ordered the pretrial detention of two elected co-mayors of the Diyarbakir Greater City Municipality pending investigation on trumped up charges of “membership of an armed organization.” The decision denies thousands of Kurdish voters their right to local political representation. The co-mayors, Gültan Kışanak and Fırat Anlı, will be replaced with government-approved trustees who will run the municipality in their place.

Kışanak, of the Peace and Democracy Party, was elected mayor by a vote of 396,000 – 55 percent of the electorate of Diyarbakir – in the 2014 municipal elections. She and Fırat Anlı assumed the title of co-mayor.

The prosecutor’s office has stated that they are being investigated for offenses including calling for autonomy and making pro-PKK speeches at Kurdish new year celebrations, providing funeral vehicles for the bodies of dead PKK members, joining unlawful protests, and making speeches allegedly legitimizing violence.

A September 1 decree from the cabinet, headed by President Recep Tayyip Erdoğan, says that elected mayors and local councils suspected of aiding and abetting terrorist organizations can be removed from office and government-chosen trustees – typically district governors – appointed in their place.

Human Rights Watch has repeatedly demonstrated that investigation and prosecutions for terrorism-related offenses in Turkey are routinely conducted in an arbitrary manner, lacking concrete evidence and an adherence to due process. The application of these laws without evidence to democratically-elected local government officials disenfranchises thousands of voters as well as unjustly penalizing the elected officials concerned.

Mayors and local councils have been removed and trustees put in their place in 27 municipalities in the southeast since the decree was issued, including Diyarbakir. The mayors removed were elected by an estimated 1,959,000 voters. A total of 30 elected mayors, including Kışanak and Anlı, are in pretrial detention and many more under criminal investigation on suspicion of terrorism offenses.

Turkey is a member of the Council of Europe and the Organization on Security and Co-operation in Europe, and a party to several human rights treaties, including the European Convention on Human Rights and the International Covenant on Civil and Political Rights.

Following the attempted coup on July 15, the government declared a state of emergency and invoked its right to temporarily place extraordinary restrictions on (i.e. derogate from) some of the standards in the treaties. But its actions do not reflect any good faith effort to respect its human rights obligations. On the contrary, the actions clearly violate many guarantees, including the rights to freedom of expression, liberty, and security, and access to justice, Human Rights Watch said.

“The jailing of Gültan Kışanak and Fırat Anlı without credible evidence of criminal wrongdoing is the most dramatic evidence to date of the government’s willingness to deny the people of southeastern Turkey the right to democratically-elected political representatives,” Sinclair-Webb said. “Jailing elected mayors and the assault on independent media seriously call into question whether Turkey’s political leaders have any regard for basic democratic principles.”