This article was published on Ekurd Daily on February 15, 2015. 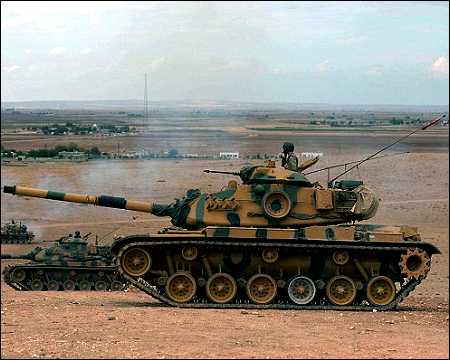 BEIRUT — Turkey defied international calls and shelled parts of northern Syria for a third day on Monday, insisting it would not allow Kurdish-led forces to seize key areas along the border.

The renewed shelling and fresh violence elsewhere in Syria — including a suspected Russian air strike that killed nine people at a hospital supported by Doctors Without Borders — cast doubts on international efforts for a ceasefire to take hold this week.

The Turkish assault continued despite calls from its Western allies for restraint and drew fierce criticism on Monday from Russia, which said the “provocative” shelling was “creating a threat to peace and security in the Middle East and beyond.”

The cross-border Turkish artillery fire, which began on Saturday, has added to an increasingly complex situation in Syria’s northern Aleppo province just days before the ceasefire is due to begin.

Top diplomats from world powers agreed at talks in Munich last Friday on a “nationwide cessation of hostilities” within a week, in the latest bid to find an end to Syria’s five-year conflict.

But advances in recent days by mainly Kurdish forces in Aleppo province have raised deep concern in Ankara, which accuses them of links to the Kurdistan Workers Party (PKK), an outlawed movement that waged a decades-long insurgency against the Turkish state.

Following similar fire on Saturday and Sunday, Turkish shelling again hit several parts of Aleppo province on Monday, according to the Syrian Observatory for Human Rights, a Britain-based monitoring group.

The powerful Kurdish People’s Protection Units YPG forces which the U.S. and Russia consider an ally in the fight against IS, is the most effective group fighting Islamic State (IS) in Syria, as the Kurdish militia has seized swathes of Syria from IS.

Turkey which still denies the constitutional existence of its own Kurds fears the creation of an autonomous Kurdish region in Syria — similar to the Kurdish region in northern Iraq — would spur the separatist ambitions of Turkey’s own Kurds numbering to 22.5 million of the country’s 78-million population.

Among the areas hit was a road west of the town of Tel Rifaat, where a coalition of Kurdish and Arab fighters known as the Syrian Democratic Forces (SDF) has launched an assault.

The town, only 20 kilometres (12 miles) from the Turkish border, is held by an alliance of mostly Islamist rebels and one of their few remaining bastions in the area.

The shelling killed at least two children in the area on Monday, the Observatory said.

The SDF was advancing despite the shelling, it said, and there was heavy fighting inside the western limits of Tel Rifaat.

The SDF has already seized the nearby Minnigh airbase from rebel forces, and severed the road between Tel Rifaat and the key rebel-held town of Azaz on the border with Turkey.

Turkey fears the Kurds will be able to create a contiguous Kurdish territory just across the border in northern Syria.

Turkey’s Prime Minister Ahmet Davutoglu warned Monday that Ankara “will not let Azaz fall” to the SDF, adding “the necessary intervention will be made”.

He also warned the SDF to withdraw from the Minnigh airbase, saying it would be “rendered unusable” if they failed to do so.

The situation is a major headache for Washington, which has backed the Kurds in their battles against the Islamic State group despite the discomfort of fellow NATO member Turkey.

In recent days, Washington warned the Kurds not to “take advantage” of the situation in Aleppo to seize new territory.

Turkey is also a key member of the US-led coalition fighting IS in Syria, and is allowing coalition planes to carry out sorties from its Incerlik base.

Ankara’s shelling has prompted criticism from Damascus, which has urged the UN Security Council to take action.

Turkey on Monday also denied claims it had sent troops into northern Syria and rejected reports it was planning a ground intervention.