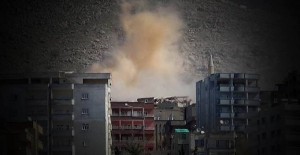 NUSAYBIN – The Turkish army forces have reportedly used the internationally-banned Phosphorus bombs in its military campaign on the Kurdish city of Nusaybin, southeast Turkey, activists and eyewitnesses reported on Tuesday.

This comes amid continuous military operations by the Turkish troops against the Kurdish city of Nusaybin, that have not stopped since 14 March.

Medical sources in the war-torn city confirmed the army’s use of Phosphorus bombs against civilians.

Nusaybin has been exposed to daily bombardment by the Turkish military for the past two months, using heavy artillery and tanks in its operations, where hundreds of houses have been burned and destroyed, amid the displacement of thousands of Kurdish civilians from their hometown.

According to reports, many civilians are still stranded in war-torn neighbourhoods of Nusaybin.

Speaking to ARA News, media activists Akram Baraka reported that the Turkish army used Phosphorus bombs in its attack on Nusaybin on Tuesday.

“After launching the bombs, we saw white smoke followed by increasingly black smoke and then the targeted buildings were exposed to huge fires,” he said.

Akram, who is also a member of the ‘No More Silence’ campaign [documenting violations by government forces against civilians in southeastern Turkey], quoted medical sources inside Nusaybin confirming the use of the internally-banned Phosphorus bombs by the army against civilians stranded in the city.

In the meantime, Turkish bombardment on Nusaybin continued, amid clashes between the army and Kurdish rebels of the Kurdistan Workers Party (PKK) inside the city.

“Every morning a new wave of bombardment is taking place in the city,” Kurdish journalist Mihemed Hesse told ARA News.

This comes as the Turkish forces continued building an isolation wall between Nusaybin and Qamishlo on the Syrian border, according to eyewitnesses.

Local activists confirmed that the Turkish army forces continue their offensive through shelling the city’s neighborhoods by tanks and heavy artillery, demolishing more than 355 houses in the Zein al-Abedin neighborhood of Nusaybin.

“Pillars of smoke are still rising from the neighborhoods as a result of the Turkish-led military operations,” a local sources told ARA News, speaking on condition of anonymity.

Members of the campaign “No More Silence”, launched by a group of Kurdish activists in the Nusaybin’s twin city of Qamishlo [Qamishli] northeastern Syria, confirmed that Turkish army bulldozers have entered the Zein al-Abedin neighborhood in order to demolish more houses in the area.

“We are coordinating with reliable sources inside the war-torn city in order to document all violations against civilians’ rights in Nusaybin,” the Kurdish group said.

Dozens of residential buildings have been destroyed by shelling and completely demolished by bulldozers, according to Kurdish activists.

This comes as clashes continued between Turkish troops and the PKK-affiliated People’s Defense Forces (HPG) in the city of Nusaybin and other parts of the Kurdish region in Turkey’s southeast.

More than 100,000 displaced people have been documented in two months, while many others remain stranded in the war-torn towns and villages in the Kurdish region, local activists reported.

In the meantime, the Turkish authorities recently began building a concrete wall along the border in the areas between Ain Diwar and Derik in Syria’s northeastern province of Hasakah.

Local sources in the Kurdish city of Derik in northeastern Syria told ARA News that the Turkish army leadership has been deploying hundreds of gendarmerie and military vehicles at the borderline with the city of Derik, with orders to shoot on each vehicle or person close to the border.

“Also, a number of Turkish snipers have been seen near the Tigris River, which separates Turkey from Syria in the area of Ain Diwar northeastern Syria,” according to eyewitnesses.

“The Turkish army forces open fire on anyone who passes the Roman bridge [3.5 km northeast of the town of Ain Diwar],” Amin said.

Turkey tightened border security measures after unrest hit the southeastern regions of the countryــwhere Kurds constitute a majority. Also, a series of explosions targeted sensitive security areas inside Turkey. Turkish forces have earlier entered the Syrian territory, breaking into the north-eastern regions, including Sermisakh and Dirna Aghe in Hasakah suburbs.