DIYARBAKIR-AMED, Turkey’s Kurdish region,— Turkish prosecutors Tuesday demanded up to 142 years in prison for the leader of the country’s main pro-Kurdish party, in a case that has intensified concerns over freedom of expression.

The charismatic Demirtas — who stood against President Recep Tayyip Erdogan in 2014 elections — was detained along with another nine HDP lawmakers and his female co-leader Figen Yuksekdag.

Prosecutors in the main Kurdish southeastern city of Diyarbakir in the same indictment asked that Yuksekdag serves up to 83 years in jail, the state-run Anadolu news agency added.

The MPs are charged with links with and membership of the outlawed Kurdistan Workers’ Party (PKK), which has waged an armed insurrection against the Turkish state since 1984.

But Demirtas, as well as the other MPs, has denied having any links to the PKK and denounced the case as political.

The Kurdish leader — one of the few politicians to come close to rivalling the rhetorical skills of the Turkish leader — says he is being punished for daring to oppose Erdogan’s drive for a presidential system under a new constitution.

Demirtas last week from behind bars slammed parliamentary debates for a new constitution, saying the arrest of the 11 HDP lawmakers “makes the debate and the vote controversial from the very start.”

Prosecutors accuse Demirtas of running a political front of the PKK. The charges he is facing range from “running a terrorist organisation”, “disseminating propaganda” for Kurdish militants to “inciting hatred and enmity”, according to Anadolu.

They are also holding the HDP responsible for the October 2014 street protests led by pro-Kurdish demonstrators against Turkey’s policy on Syria. The spiral of violence claimed at least 31 lives.

Demirtas is currently being held at a prison in Edirne, in northwest Turkey, far from the southeastern heartland of the Kurdish movement. 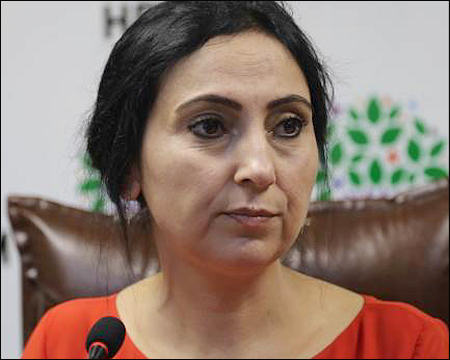 The government had pursued a strategy of peace talks with the PKK but clashes flared in 2015 after the collapse of a two-year ceasefire agreement.

The PKK is considered as ‘terrorist’ organization by Ankara, U.S. and EU. However, Russia, Switzerland, India, China and the United Nations do not list the PKK as a terrorist organization.

According to the HDP, over 50 pro-Kurdish mayors have also been detained, including prominent Mardin mayor Ahmet Turk, who was taken in November.

Thousands of officials from the HDP have been detained since 2015. Turkey detained over 200 HDP members in December 2016.

But critics complain the crackdown goes well beyond the alleged coup plotters and accuse the authorities of using the state of emergency imposed in the wake of the putsch to muzzle all opposition, not merely the suspects themselves.

Demirtas, a human rights lawyer, has emerged as a key political opposition actor dubbed the “Kurdish Obama”, leading the HDP to an unprecedented political breakthrough in June 2015 parliamentary polls, weakening the standing of Erdogan’s party.

He also attracted votes from secular Turks, who opposed Erdogan’s rule. Detractors however said he failed to distance himself from the PKK.

Since July 2015, Turkey initiated a controversial military campaign against the PKK in the country’s southeastern Kurdish region after Ankara ended a two-year ceasefire agreement. Since the beginning of the campaign, Ankara has imposed several round-the-clock curfews, preventing civilians from fleeing regions where the military operations are being conducted.

Observers say the crackdown has taken a heavy toll on the Kurdish civilian population and accuse Turkey of using collective punishment against the minority.