Turkey should consider stripping citizenship from supporters of terrorism: Erdogan 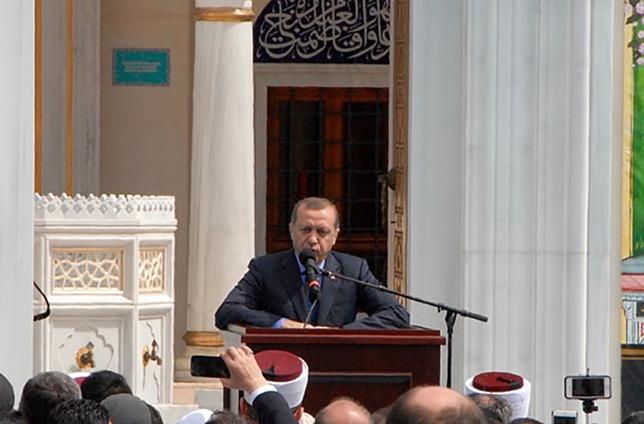 Turkey should consider stripping citizenship from supporters of terrorism, President Tayyip Erdogan said on Tuesday, adding that the government had “nothing to discuss with terrorists”.

His comments, in a speech to a group of lawyers in the capital Ankara, come after he ruled out on Monday a revival of peace talks with the outlawed Kurdistan Workers Party (PKK). He has vowed to stamp out the conflict in the mainly Kurdish southeast, at its deadliest in two decades, once and for all.

“We need to be decisive to take all the necessary measures including stripping of citizenship for terror organization supporters,” he said in comments broadcast live on television.

“This state has nothing to discuss with terrorists. That business is over.”

Erdogan did not specify who he was targeting with the comments. In the past he said that those Turkey accuses of supporting terrorism – whether they are journalists or aid workers – are no different from terrorists themselves.

Such comments have worried rights advocates who fear that anti-terrorism laws, already used to detain academics and opposition journalists, will now be used in courts to stifle discussion of issues such as the Kurdish conflict.

The autonomy-seeking PKK abandoned its two-year ceasefire in July, reigniting a conflict that has claimed more than 40,000 lives, mainly Kurdish, since 1984. The PKK is considered a terrorist organization by Turkey, the United States and the European Union.

The violence has wrecked a peace process, spearheaded by Erdogan, that was seen as the best chance at ending one of Europe’s longest-running insurgencies. Almost 400 soldiers and police and thousands of militants have been killed since July, Erdogan said last week.

He also said on Tuesday that parliament should “immediately” act to strip parliamentarians of their legal immunity from prosecution.

Erdogan has been lobbying for an end to the immunity, accusing the Kurdish-rooted Peoples’ Democratic Party (HDP), parliament’s third-largest party, of being an extension of the PKK.

The HDP says it is opposed to violence and wants a peaceful solution for Turkey’s Kurds.