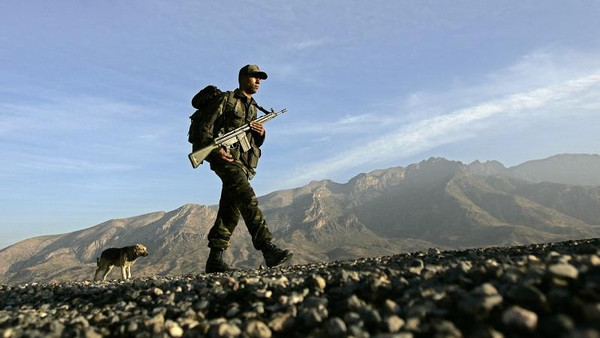 By Menekse Tokyay | Special to Al Arabiya News
Thursday, 7 May 2015

A group of 300 rebels will benefit from the first stage of the program, and will be followed by a second group of 300 fighters. In total, 2,000 rebels are expected to be trained by the end of the year.

On Feb. 19, Turkey signed a deal with the United States to take part in the program, which was originally due to begin in March.

The program will be conducted under the guidance of the Turkish Armed Forces. Ankara and Washington will provide an equal number of trainers, according to the bilateral agreement.

In the second phase, they will be trained in the southern province of Hatay in the use of equipment such as anti-tank weapons and machine guns, before being fully battle-ready in Syria.

Trained rebels are expected to fight both the Islamic State of Iraq and Syria (ISIS) and the Syrian army, Çavuşoğlu said.

The establishment of a safe zone inside Syria would be necessary for the rebels to fight in a secure way, he added, dismissing claims that Turkey would send its own troops to Syria.

“The real picture on the ground makes me cautious. However, further initiatives to adopt a comprehensive defensive military strategy would render me optimistic in the long run,” Gurcan told Al Arabiya News.

He said Turkey would train rebels to enable them to protect their villages and neighborhoods against ISIS.

“But in order to be sustainable and effective, this training should involve conventional military tactics such as armored operations for attacking targets, as well as guerilla strategies such as hit-and-run and improvised explosive devices,” he said.

“It’s also a must to provide some degree of sound logistical support to protect the fighters against ISIS attacks.”

Gurcan underlined the importance of coaching and training potential leaders among Syrian rebels to increase the sustainability of the initiative.

Since Nov. 2014, Turkish soldiers have been training Kurdish peshmerga forces in northern Iraq as part of the fight against ISIS.

Ufuk Ulutas, director of foreign policy research at the Ankara-based SETA Foundation, said countries that support the Syrian opposition, including Turkey and the United States, face two options: put boots on the ground to oust President Bashar al-Assad, or substantively help rebels already on the ground to achieve that.

The program, “with its all shortcomings, basically aims to achieve the second option,” Ulutas told Al Arabiya News.

“Turkey, as a neighboring country that has been suffering from spillover for more than four years now, has been advocating the second option for a long time.”

“Besides that, Turkey – having the second-largest army in NATO, well-known military professionalism and cultural affinity with Syrians, is in a unique position in terms of training opposition fighters.”

Ulutas said to improve stability and living conditions in Syria, and to prepare the ground for a political solution, the program must “increase the number of trainees to a level that would quantitatively mean something on the ground. The rumored numbers of trainees are too low, and wouldn’t have the desired impact.”

Experts emphasized to Al Arabiya News the need to establish no-fly-zones for the Syrian opposition to defeat the Assad regime and ensure stability.

“Rebels are doing quite well on the ground, but don’t have the means to counter the regime’s aerial attacks. A major portion of human loss in Syria is caused by the regime’s indiscriminate use of its air force, including the use of barrel bombs and chemical weapons,” Ulutas said.