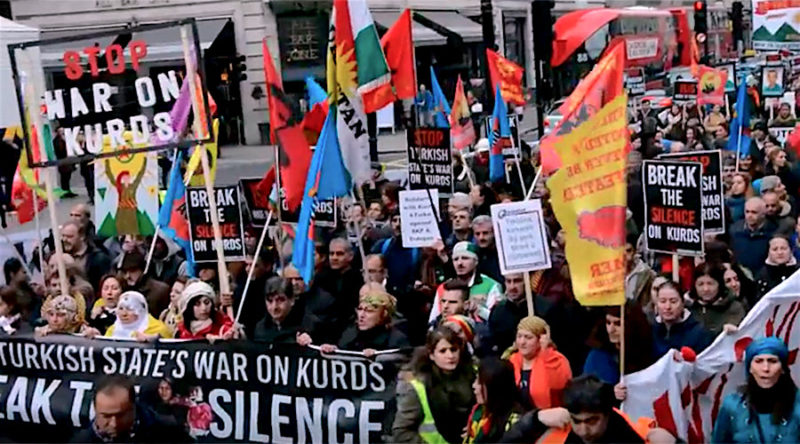 Syrian Kurdish official Aldar Xelil condemned the move as a ‘conspiracy’ against the ‘Rojava revolution’.

“This coincides with the war on Rojava, Turkey continues its war in the field of media, and is trying pressure European broadcaster companies to try to close the Kurdish channels of Ronahi, Sterk and the News Channel that expose ISIS and acts of Turkey,” said Xelil, a senior official of the Democratic Society Movement (TEV-DEM).

“These attempts come in the context of completing the attempts to conspire against the revolution of our people and its struggle for democracy and it is a procedure which is contrary to the standards of democracy recognized by the European Union,” Xelil said.

He added that the European governments are more than ever aware of the policies of the Turkish government to suppress freedoms, amid the imprisonment of elected Kurdish MPs and the dismissal of thousands of people.

“The intensity of these attacks reflect that our people are in the right way of struggle to renounce the central authoritarianism [of Turkey] and to end extremism, strengthen the democratic solution in the region and to expose the arbitrary crackdown in Turkey, as well as the violations of rules and standards of international press,” he concluded.

Following the failed Turkish military coup attempt in July 2016, the Turkish government closed down by decree over 160 media outlets, most of them were either Kurdish outlets or linked to the Gülen movement, and imprisoned dozens of Kurdish politicians of the Peoples’ Democratic Party (HDP).

The number of journalists in pretrial detention on the basis of their writing and journalistic activities surged to 144 by mid-November, making Turkey once again a world leader in jailing journalists.

“Presenting no evidence of criminal wrongdoing, authorities detained many reporters and columnists employed by media outlets allegedly linked to Gülen. Among those jailed pending investigation were veteran journalists and commentators who have been prominent government critics such as Nazlı Ilıcak, Şahin Alpay, Ahmet Altan, and Mehmet Altan,” Human Rights Watch said.